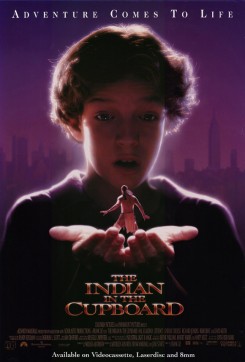 Indian In The Cupboard, The

The Indian In The Cupboard is a story about a boy named Omri and the magic cupboard he receives for his birthday from his brother. The cupboard has a key hole and Omri's mother, who is a collector of keys, finds a key to unlock the cupboard. Omri is a collector of small plastic toys, such as army men, animals, Ninja Turtles, etc. His friend, Patrick, gives Omri an Indian figurine from a school display as a present . Omri places the Indian inside the cupboard for the night and turns the key to lock it. During the night Omri hears a commotion coming from the cupboard. He gets up, unlocks and opens the door. The Indian, Little Bear, has changed from a plastic figurine into a living, breathing , six inch human. It seems that the cupboard along with the key is the magic which transforms figurines into life and life to figurines. At first the Indian is afraid of Omri, but after talking to each other, Little Bear and Omri become friends. Omri takes Little Bear outside so he can explore his new surroundings. Little Bear sees many familiar things on his outing such as a deer and a butterfly. He even performs a sacred ceremony with a deer. Little Bear prays over the animal and when he is finished praying he supposedly slits the dear's neck, although this is never shown. While outside, Little Bear is pecked by a pigeon so Omri takes a medic from his army collection and puts it into the cupboard to bring it to life so it can tend to Little Bear's wound. In reality you never see the pigeon peck at Little Dear. After the medic tends to Little Bear's wound, Omri puts him back into the cupboard and turns the key, once again changing him back to a figurine. Omri takes complete responsibility for his little friend's needs and safety both inside his room and when they venture outside. He also provides food and materials Little Bear needs to build a house. He takes tools from his collection of toys and places them in the cupboard and changes them into real objects such as a tomahawk, etc. Omri doesn't like his brother's pet rat and is always watching to make sure it doesn't get into his room. Little Bear has built a small house on the floor next to Omri's bed, and he is afraid if the rat gets into his room the rodent will find Little Bear and harm him. Omri comes home from school one day to find the rat outside his bedroom door in his plastic ball. He gets so upset that he kicks the ball, and the ball and rat roll down the hall, bounce down the stairs and land in the foyer. Patrick finds out about the cupboard, and he wants to try it out himself by putting a cowboy and horse in the cupboard, thus providing Little Bear with a friend. Before Omri can stop him, Patrick puts the cowboy and horse in the cupboard and turns the key. When they open the cupboard, a cowboy and horse come charging out of the cupboard. The horse comes to an abrupt halt and the cowboy goes sailing over the horses head towards the floor. Omri catches him with one of his dad's handkerchiefs. When asked, the cowboy tells them his name is Boone. This becomes a great adventure for the boys, but they eventually realize they must do the right thing and send their friends back to their own life and time. While sleeping over at Omri's one night, Patrick and Omri decide it is time they send their friends back---Boone to Texas and the wild range, and Little Bear to his people and the Indian way of life. The only problem is that the key is missing and the boys haven't been able to locate it. Without it they are unable to send them back. Patrick and Omri finally give up and decide to go to bed when they hear the rat crawling around under the bedroom floor. When they look through the cracks in the floor they see the key but they can't reach it, so Little Bear goes through the crack to get it. The boys and Boone are frightened for their friend because the rat is under there, but Little Bear dodges the rodent and successfully retrieves the key. After he climbs back out of the crack, the rat comes leaping out of a hole left open in the floor. Omri catches the rat and puts it out of his room. The experience has truly touched everyone involved, and they all see each other and life in a much different light. Little Bear and Boone leave with a feeling of mutual respect for each other and their way of life. Before this experience Little Bear and Boone had only hatred and distrust for each other because of the prejudices between their races. Omri and Patrick have a new outlook on the value of life, love, and friendship. They have learned that every person is different and that you must look at each situation with an open mind and heart.

The scene where Omri kicks the ball with the rat in it and the ball bounces down the stairs was filmed in cuts. A real rat was used when the rat was just running in the ball. A fake rat was used when the ball was kicked and it bounces down the stairs. Six rats were used in the film. All of the rats were conditioned to run in the ball. Therefore none of them were overworked for any one stunt and were not used for more than five minutes at a time. A real rat and a rat puppet where used, along with special effects, in the scene where Little Bear and the rat are under the floor. When the rat leaps through a hole in Omri's floor the rubber puppet was used. When Little Bear goes outside, a deer walks in front of him. To accomplish this, trainer A placed the deer on her mark and trainer B called the deer with a buzzer. For safe footing for the deer, celotex was applied to the floor. A fake deer was used for the scene where Little Bear is first praying over the animal and then cuts the deer's neck. In his outing Little Bear also sees a butterfly sitting on a twig before it flies off. The scene where Boone and the horse appear out of the magic box was shot on a platform before a blue screen. This was superimposed in post-production with the background of Omri's cupboard. To accomplish this, wranglers stood at the end of the platform and cued the horse with hand signals to stop on his mark. Safety rails at the end of the platform were used, also celotex was used on the floor for safe footing. In the last scene, Boone's horse rears. This was a trained rearing horse. Again, the horse was filmed before a blue screen and later was superimposed in post-production with the background of the cupboard.