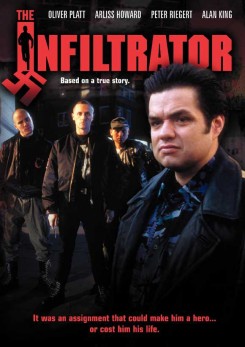 The Infiltrator is a movie based on a true story about an American journalist infiltrating the third Reich movement in present day Germany. Yaron is a German born Jew living in America. He is sent to Germany to do a story about skinheads. However, after seeing the violence with the authorities not doing anything about it, he decides to further investigate. Yaron believes there is more to this story than just the skinheads. Why else would the police look away and ignore the violence and prejudice going on all around them. Yaron makes friends with the skinheads and tells them he is an American named Ron Furry, a journalist doing a story about the skinheads and the movement. In order to show support for the movement, there are many times when he must stand by watching innocent people beaten up and harassed. In one such instance Yaron is witness to Kadar, a Turk and friend, being blinded during a brawl at Kadar's coffee shop. Yaron can't do anything to help or he takes the chance of blowing his cover. After this, the skinheads really believe he is one of them and take him to meet Gunther, a German war veteran, that is still involved in the movement. After numerous visits with Gunther, Yaron is befriended by the older man and wins his trust. Through Gunther he meets some of the more important people involved in the movement at a rally held at a well to do gentleman's house. Yaron is so appalled by all of the prominent people he sees there, that he goes to the Jewish council and offers his support to help stop this insanity. With the help of the council, Yaron further infiltrates the organization and produces documents with names of people from all over the world, including the United States. The council takes its case to the United States and to the German government, in hopes of an investigation being started. They are disappointed by the German government's reaction. Unlike the United States, they don't believe it is as bad as the council states in their reports. Even with this damming evidence, they push it aside for what they believe to be more important issues. Yaron has done as much as he can. It is up to the council to pressure the officials into action. His work is done. However, at a time when he should feel wonderful, he has one regret. He had to implicate Gunther for his involvement in the Third Reich movement and now charges are being filed against him. Gunther had become a friend and trusted Yaron therefore he felt he must tell Gunther about the charges himself. After this is done Yaron can now return to the states and continue with his work.

In the scene when Yaron meets Gunther he is greeted at the door by a barking dog. The dog had been trained to bark when told to "speak" and was rewarded with food. Gunther and Yaron go for walks and the dog is walked on a leash. The trainer introduced the dog with the actor before the scenes in order for them to get acquainted. Other scenes consist of the dog lounging around the house. When Yaron goes to meet the big guys in charge at the rally, there are guard dogs being lead by soldiers. The dogs merely walked from A to B with the actor and were rewarded with food at completion.