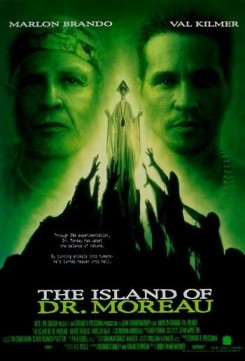 Island of Dr. Moreau, The

The Island of Dr. Moreau is the third and latest film version of the science fiction classic by H.G. Wells. Having been set adrift after his plane goes down in the Java Sea, Edward Douglas is finally rescued by a battered sailing ship. Although he is delirious, he realizes that he is being treated with medical care. Unbeknownst to Douglas, he is actually about to become part of the scientific research of the famous and eccentric Pulitzer Prize winning geneticist, Dr. Moreau. The man attending Douglas on the ship turns out to be Montgomery, the assistant to the famous Dr. Moreau. Montgomery convinces Douglas that it is in his best interests to accompany him onto Moreau's island rather than remain at the mercy of the ship's captain and his crew. As Douglas begins his exploration of the island and his introduction to the work of Dr. Moreau, he feels both terror and revulsion. Montgomery informs Douglas that Moreau had to leave the states because of the outcry of protest from animal rights activists. Moreau's belief that he could fuse the best of genetic traits from the animal and human species to create a more advanced lifeform is the basis of his past seventeen years of research. What he has created as a result, while philosophically humane, becomes an atrocity of both the animal and human form and ultimately proves to be Moreau's undoing.

There are a variety of animals seen in the production, primarily as background atmosphere. These background animals which include a panther, a llama, rabbits, and a snake are seen in cages on the rescue ship early in the film. Later, once they arrive on the island, other animals are seen in cages in the laboratory such as monkeys, a burro and a jaguar. Toward the end of the film, it is Moreau's daughter along with Douglas, who helps to free these caged laboratory animals. In this scene we see a goat and a llama jump out of the cages as the doors are opened. There are several scenes in the film where we see a cage of at least half a dozen rabbits. First this cage is seen on the ship, then being unloaded from the launch boat onto the dock as Montgomery and Douglas arrive on Moreau's island. We next see it strapped to the hood of Montgomery's jeep as he drives through the jungle terrain. The jeep arrives at a clearing where a larger cage containing more rabbits is located. Montgomery puts the new arrivals together with the island rabbits. He holds one in his arms and allows Douglas to give the animal a kiss. We then see Montgomery snap the neck of the rabbit and hand the limp body to Douglas. Later, a cooked rabbit is served at the dining table of Dr. Moreau who is appalled that meat is being consumed and that an animal has been killed on his island. In several scenes throughout the film we see a mutilated rabbit that looks to have been killed by another animal form. For the scene where Montgomery kills the rabbit and for the scenes where dead rabbits are shown, deceased rabbits were purchased frozen. During pre-production a tiger was trained to jump from a number of platforms ranging in height from three to twelve feet and each measuring four by eight feet of landing surface. Two trainers worked with the animal while three others surrounded the platforms. The animal was given a verbal cue and visual directions regarding the sequence of jumps. This movement was later used in post production to digitally blend actual animal movement with animatronic creations. American Humane monitored the animal action that was filmed in the United States, but was not on set in Australia during location filming.