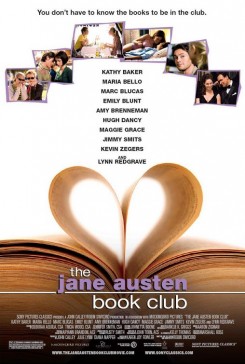 In present-day central California, six friends who are all book club members discuss six of Jane Austen's novels over a six-month period. Life imitates art when the group starts to see a resemblance between their own lives and the novels' plotlines.

Before filming began, the actors were instructed on the proper handling and feeding of the dogs. All areas were thoroughly inspected for hazardous debris and trainers stood nearby for all dog scenes. All food and treats the dogs ate were safe for consumption.

Jocelyn (Maria Bello) jogs with two dogs. For this shot, one trainer released the dogs and cued them to follow the actress while another trainer ran in front, calling to the dogs to get them to continue in the actress' direction. The road was closed off to traffic and the actress carried treats in her pockets to entice the dogs to keep up with her. Later, as Jocelyn sits on a porch swing and reads a book, one of her faithful dogs is lying on the ground beside her as she rubs it with her foot. A trainer put the dog on its mark and stood off-camera to supervise. The dog was more than happy to lie there and be petted.

In a couple of scenes, some kennels that house a few dogs are in Jocelyn's yard. The kennels were checked before filming began to make sure they were safe. Dogs were placed in the kennels right before filming began, and trainers stood just off-camera during filming. Each kennel was covered with mulch and contained a dog house and bowls of food and water. In one scene, a dog buries his nose in Grigg's (Hugh Dancy) crotch. A treat was put into the actor's pants and the dog was cued by an off-screen trainer to find the treat.

A dog lies in a chair in one scene, and later looks out the window, watching Jocelyn and Grigg in the yard. A trainer put the dog on its mark and then stood off-camera using a combination of hand signals and verbal cues to get the dog to achieve the action. Another trainer stood out in the yard calling to the dog to get it to look toward the actors.

Jocelyn helps wash a dog in a tub as dogs are groomed at an animal rescue shelter. Trainers doubled as the actors in this scene. All of the animals were used to being bathed and groomed and were comfortable with the action. The tub was filled with warm water. The dog in the tub was secured to the tub by his collar for safety and was dried off immediately afterwards.

While Jocelyn calls Grigg in a dog park, dogs are training on an agility course in the park. Five dogs that were trained on and familiar with the course were used for this scene. Off-camera trainers used hand signals and verbal cues to get the dogs to run the course. One costumed trainer held the leash of one dog and helped him work the course. The dog was familiar with the course, but the costumed trainer pretended he was not.

Jocelyn and Grigg are at the beach, walking and tossing a ball to a dog. The actors carried treats in their pockets to get the dog to follow them. Two trainers stood off-camera using a combination of verbal cues and hand signals to help the dog achieve the mild action. To get seagulls and other wild birds to appear in this scene, a crew member threw some bread crumbs right before filming began to entice the local birds into the camera's view.