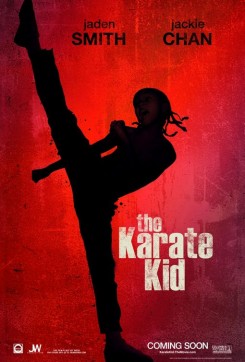 When American Dre (Jaden Smith) moves to China, he gets bullied by classmates who know kung fu, he befriends a martial artist mentor named Mr. Han (Jackie Chan), who convinces the bullies to fight Dre in a supervised competition.

Birds and Scorpions Birds are seen in cages hanging from trees in the park, and scorpions are seen in a bowl at a Chinese fresh food market. For this mild action, trainers inspected the cages and made them comfortable, and secured them to the trees. The scorpions were placed in a deep bowl so that they could not escape. They remained at liberty in the bowl until the brief scene ended. A young Chinese girl talks about eating them, but no live scorpions were eaten during this film (production made prop flour-based scorpions for the character to eat). All grounds were inspected for hazards and sets were closed and secured. Cast and crew members were introduced to the animals and instructed on their proper handling. Snake and Fly The fly that Mr. Han (Jackie Chan) swats and kills and the cobra that the Chinese woman charms were both computer-generated. Production provided documentation for the dead (deep-fried) crickets, starfish and insects in the market scene, which were food products purchased at a local market in China, where the production was filmed. American Humane also monitored some turtles, fish, pigeons and dogs that appear in the background of some scenes, but which were all cut from the theatrical release.