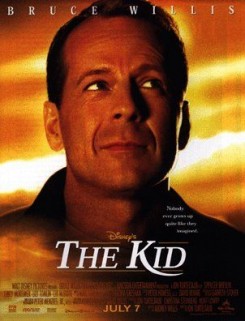 The Kid is a light hearted comedy about Russ, a middle aged, rich, businessman who magically meets himself as a kid. "The Kid" isn't too impressed with the way he's turned out. At first Russ is confused and wants the Kid to disappear, but later realizes that his visit might just change the rest of his life.

The "Mature" Chester Chester is played by a Golden Retriever named Ted. The first time Chester appears, he is riding in the back of a pick up truck that Russ and the Kid pass. The trainer placed furniture pads in the bed of the truck to cushion Chester's ride as well as a harness to hold him in place. One trainer rode in the pick up truck, doubling as an actor. A second trainer rode on the camera truck that drove alongside the pick up truck and waved his hands to get the dog to look at the camera. Chester appears again in a scene which takes place in the diner. He walks over to the booth where Russ and the Kid are sitting and licks the Kid's face. A man on the other side of the diner calls to the dog and he runs to the man and exits the diner with him. The trainer verbally cued Chester to run to the booth, where the young actor hugged the dog. Chester responded by licking the Kid's face. The trainer stood off camera and used hand signals to cue the dog to run towards the other actor who stood by the door and together they exited. The last time you see Chester is at an airport with his human family, about to board an airplane. The dog was verbally cued by the trainer to sit by the plane and eventually follow the family aboard. The trainer waited inside the plane with an edible reward for Chester. Tripod, The Three Legged Dog When you first see Tripod, she is tied to a post. You notice that she has only three legs and is wearing a collar that has firecrackers attached to it. You immediately feel sorry for this dog. But then our hero, "The Kid", unties the dog and is rewarde d with a big sloppy kiss. Tripod is played by a two year old, female, Boxer mix named Luna. When Luna was just a pup, she was hit by a car and lost her leg. She adjusted very quickly to life on three legs and has no trouble getting around. She lives with a very caring human and is spoiled on a daily basis. A trainer was present on the set and made sure the firecrackers were emptied before being attached to the dog's collar. The trainer tied the dog to the post and cued Tripod to stay. The Kid removed the collar from the dog and unties the rope from the post. Tripod shows her appreciation by licking his face. The "Kid" Chester Three Golden Retriever puppies played the part of "The Kid Pooch." These puppies were pampered extras whose owner financed their higher education through their cameo roles. We understand that all three puppies are living in loving homes and have all given up acting to pursue their first love, socializing in the dog park!