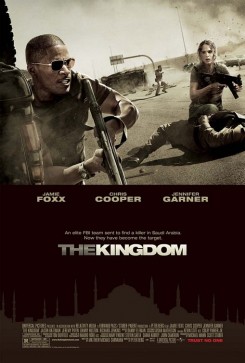 Ronald Fleury (Foxx), an FBI special agent, assembles an elite team and negotiates a secret trip to Saudi Arabia to find the terrorists behind the bombing of an American housing facility.

As two women walk dogs on leashes on a sidewalk, a truck drives by and its occupants begin shooting. The women are shot and fall down as the dogs run away. A ridgeback shepherd mix named Dakota and a terrier mix named Buster played the dogs in this scene. The dogs were handed to stunt women right before filming began. A trainer placed cotton in both dogs' ears before filming, and quarter loads were used in the guns to help soften the sound. The dogs were well-rehearsed for the action before filming, and squibs (blood packs) were placed on the women. When the women fell down, the off-screen trainers called the dogs, who obeyed and were rewarded with treats.

The black and white footage at the beginning of the film, which includes some brief scenes with horses and camels, was stock footage purchased by the production.

American Humane did not monitor scenes with a camel, police dog, falcon or cat.