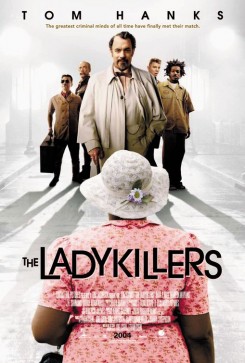 The Coen brothers have remade the original 1955 comedy/crime caper starring Peter Sellers and Alec Guinness. This time around, Tom Hanks stars as Goldthwait Higginson Dorr III, Ph.D., a Southern professor who organizes a ragtag group of bumbling thieves to rob a riverboat casino named, appropriately enough, the "Bandit Queen". Dorr rents a room from Mrs. Marva Munson (Hall) and convinces her to allow his chamber music group to practice in her cellar, from whence the robbers plan to tunnel over to the casino. When the crotchety old woman figures out what they're up to, the thieves decide she must be eliminated—a task infinitely more difficult than it seems.

This film contains mild to moderate animal action involving a clever orange tabby cat, an English bull dog, and some birds. Because the feline action was extensive and varied, the production alternated nine different cats for the part of Pickles.

An English bulldog starring in a pet food commercial must traverse a mock battleground set enhanced by small explosions and war-like sounds. His prop canteen falls off as he approaches a bright yellow food dish brimming with kibble. Two trainers, Christie Melie and Janine Aries, did most of the dog and cat work for this film. Janine positioned "Tank" on his mark and released him to run through the set dodging explosions. The explosions — which were all soft material and detonated after the dog had run five to seven feet past them — did not faze Tank at all. The dog ran to Christie, who stood at the end mark with a buzzer and bowl of food. Prepping for this scene took place over a three-week period during which the pressure of the explosives gradually increased. For early rehearsals, the mortars had fences around them. To accustom the dog to the noise of the exploding cork mortars, one trainer would walk him past a mortar and let him watch as it was set off at a pressure of 25 pounds. To cushion Tank's stride, the running path of the mock set was carpet covered with dirt.

After Tank loses his canteen, the frustrated director yells "Cut!" and an assistant walks a second dog, "Tubbs", on set. This canine sports a vintage World War I gas mask strapped to its face and panting noises are heard. The "hyperventilating" dog falls on its side then rolls over onto its back and has its tongue lolling out. Deeply alarmed, the assistant tries to perform chest compressions on the victim and then pries open the dog's jaws to administer mouth-to-mouth resuscitation. The actor held the leash while the trainer cued the dog to stay and look. Given the cue "on your side", Tubbs collapsed on the ground. After the dog successfully completed each action, Christie rewarded him with meatball treats. Attempts to revive Tubbs with CPR were actually performed on an animatronic dog. Tubbs' "gas mask" was specially made for dogs, and Christie and Janine worked with the dog to get him comfortable wearing the mask prior to actual filming.

During this scene, the ever-irreverent Coen brothers include a subtle dig aimed at American Humane's on-set monitoring. After Tubbs collapses, the director frantically instructs his assistant not to let the "humane f***er" see what's happened. For the record, the on-camera humane officer was an actor and a real American Humane Safety Rep worked behind the scenes documenting the animal at work and photographing the animatronic for our files.

Pickles sits on the sofa while Munson knits and converses with a portrait of her late husband. Candles on the fireplace mantle flicker and suddenly blow out, and the cat arches his back as though he's heard something disturbing. Moments later, Pickles jumps off the sofa when there's a knock at the door. The trainers placed the cat on his mark on the sofa with a waist tie to keep the frisky feline in a sitting position. To get Pickles to hiss and arch his back, Janine repositioned the cat and a third handler walked a dog on a leash in the cat's view. The dog showed absolutely no interest in the cat and simply focused on following its trainer, and by the third take, the cat had also lost interest in the canine interloper.

As soon as Munson opens the door to professor Dorr, Pickles runs outside and climbs up a tree in the front yard. Dorr tries to fetch the feline as it hisses and skulks backward along a branch, which breaks and sends Dorr tumbling to the ground. Getting this scene just right required several shots. When the actress opened the door, Janine called to Pickles and Christie opened his crate so that the cat would run out the door and down the porch steps to where Janine stood hidden behind the tree. Once positioned in the tree, Pickles wore a monofilament waist-tie attached to a platform directly under the branch and held by Janine. Christie stood on a ladder and verbally cued Pickles to crawl backwards. The special effects crew manually rigged the tree branch to shake, rattle, tilt and eventually break off. Hanks' fall was filmed separately and the two adversaries came together in post production.

Pickles scampers around the corner when the men remove the excavated dirt from the cellar. When they get to the river, the cat escapes from the hearse and watches curiously as they dump the bags of dirt on to the trash barges floating by under the bridge. To get the cat to run up the stairs, Christie released Pickles in the cellar and Janine stood at the top of the stairs sounding a buzzer to which Pickles had been trained to respond. For the next shot, Christie placed Pickles in the back of the hearse while Janine stood off to the side using the buzzer to attract the cat's attention. Pickles jumped out of the open car door and ran over to the trainer. For the last part of the sequence, Pickles was placed in a sit/stay position and rewarded with food treats after completing the scene.

Garth Pancake (Simmons) loses a finger during the explosion in the cellar. Pickles soon appears with the severed digit in his mouth and runs outside to climb the tree with his prize. The General (Tzi Ma) trails the cat down the sidewalk in hot pursuit. Trainers prepped the cat to go from A to B on straight paths and around corners while carrying the finger in his mouth. Once outside, Janine sat in the tree and buzzed Pickles to run up the tree to her. For the chase down the street, Christie released Pickles next to the camera and Janine called to him with a buzzer from around the corner. The General ran behind and the total distance traveled was approximately 20 yards—two house lengths.

Gawain (Wayans) finally gets up the nerve to shoot Munson, but the setting transports him back to a terrible moment from his childhood. Holding a cute black and white puppy in his arms, Little Gawain approaches his mother and she proceeds to smack him for having a dog. For this scene, the production borrowed a litter of English cocker spaniels from a breeder when the pups were ten weeks old. Trainers taught the boy how to properly handle the dogs, and he played with all the puppies before filming actually began. The puppies were very comfortable and enjoyed the interaction.

The General runs down the stairs just as the cat runs up, causing the man to trip and fall down the stairs to his death. For this scene, crew members set up stunt pads on the stairs, leaving a free path on one side for the cat to run up. Christie released Pickles from around the stairwell corner and the cat ran quickly upstairs to Janine, who was buzzing and calling to him. As the cat hit the top of the landing, it looked like he collided with the General, but it was actually a stunt man jumping over the cat. Trainers prepped the cat for this scene many times. In order to make the environment more tranquil, production removed any unnecessary crew from the set, trainers played a radio as background noise, and the cat was comfortably crated between takes.

Pickles runs out of the house and down the street, again carrying the finger in his mouth. He too goes to the bridge and leans between the balusters to dispose of the digit on the next approaching trash barge. In order to make it easier for the cat to carry the finger during the running sequence, production created a lightweight apparatus which fit over his head and ears and kept the finger next to the cat's mouth, making it seem as though it was clenched in his jaws. The bridge sequence was actually filmed on a sound stage with a blue screen all around and above the bridge. Christie released the cat and instructed him to pick up and hold the fake finger. In the second take, Janine, ducking down below the bridge, called to Pickles to get him to look down between the four and fifth balusters and instructed the cat to drop the finger. Small sand bags were added to either side of the flanking balusters to guide Pickles to his mark.

A raven flies up and perches on a gargoyle. When the bird flies away, it knocks the statue's head off, killing Dorr. To achieve this effect, a raven trainer stood on a very high ladder and released the bird from a crate. A second trainer called the bird over to the head and provided food rewards upon successful completion of the action. The trainer then called for the raven to fly off, thus cueing the special effects crew to make the head fall off. The gargoyle head was attached with a hook and cable, and special effects simply removed the hook and the head fell off as if from years of decay.

Each time the dwindling group drops another body off the bridge and onto the trash barge, some startled birds fly up and then resettle on the trash. Trainers stooped out of frame holding birds; they tossed the birds up in front of the camera and safely retrieved them.