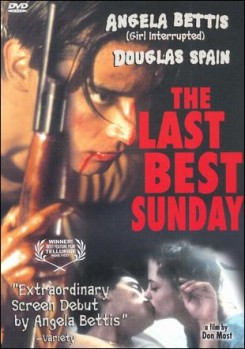 This drama takes place in a small southern town where a young man kills two men who beat him up. He is injured and seeks help from a young woman who is alone in her house while her parents are out of town. Although she is frightened at first, she eventually helps the young man and begins to fall in love with him.

There is only one scene in this film that contains animal action. Two men ride in a truck and one points off screen indicating a dog, which he mistakes for a coyote. We see one man shoot his gun and we hear a whimper. As the truck drives off we see the bloody dog lying on the side of the road. The dog scene was filmed after the guns were fired to avoid scaring the dog. The trainer placed fake blood on the dog and verbally cued him to lie down on his mark. Hand signals were then used by the trainer to cue the dog to stay, lie down on his side, put his head down and move his paw. The whimper was a sound effect that was added later during post production. After the scene was filmed, the trainer rewarded the dog with an edible treat.