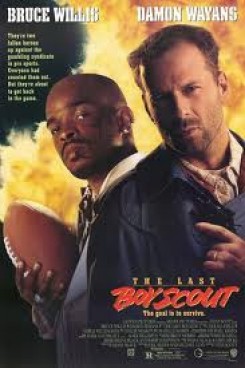 The Last Boy Scout is an action-packed adventure involving professional football, illegal gambling and corrupt politicians. Private investigator, Joe Hallenbeck uncovers an illegal sports gambling scheme after Cory, the exotic dancer he was hired to protect, is murdered. Joe's a former Secret Service Agent who once protected President Reagan. A corrupt Senator had Joe fired after Joe punched out the drunken Senator for beating up a prostitute. Joe's personal life is also in shambles with an unfaithful wife and a troubled teen-age daughter. Joe teams up with Cory's boyfriend Jimmy, a former pro football player who has also seen better days. Together these two losers investigate Cory's murder and pursue the guilty while picking up the pieces of their own shattered lives. There are spectacular chase sequences in cars and a suspenseful climax on the field during a football game.

Joe tosses a tennis ball for a neighbor's playful dog just before a nearby car explodes and a flaming tennis ball is seen rolling across the ground. The dog is not shown in the same shot with the exploding car or flaming ball and was not present when those shots were filmed. The same dog is seen later in the film barking over a "dead" body. Dogs are in several other scenes. A poodle sits in the lap of a man lounging poolside as a car careens into the pool. This scene was shot in cuts and the dog was not present when the car crashed into the pool. Two Dobermans belonging to one of the story's villains are supposedly with him in his house when it explodes. The exploding house is seen in a separate shot and, of course, there were no dogs or actors inside. Horses are seen on field as mascots for the fictitious team the Los Angeles Stallions. In the exciting climax, Jimmy mounts a stallion and charges down the playing field tossing a strategically timed football. In other animal action pigeons and fish in an aquarium are seen briefly as atmosphere. In one scene there was a dead squirrel thrown on Joe while he is sleeping off a hang-over. This was a taxidermied squirrel rented from a prop house.