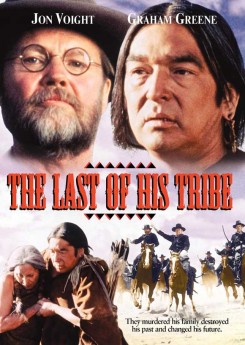 Last of His Tribe, The

Based on actual events, The Last of His Tribe is a handsome production set in the early part of this century. It tells the story of Ishi, a Yahi Indian, a tribe thought to be extinct. Ishi's efforts to adjust to an alien society are told with sensitivity and intelligence. It's night as a lone intruder stealthily makes his way across a ranch and slips inside a small slaughterhouse and attempts to cut down a carcass. The theft is interrupted by ranch hands and a dog who holds the intruder at bay. When the intruder does not talk, they look at him more closely and realize he's a rare discovery, a wild Indian. He's held in the local jail until Tom Waterman, an anthropologist, can bring him to the San Francisco Museum of Anthropology. He becomes the ward of the museum's director, Professor Alfred Kroeber, a renown anthropologist, who gives Ishi a job as a museum helper and teaches him English. He's kind and wants to care for Ishi and write a book about him. As they come to know each other, Kroeber asks Ishi how he came to be alone and Ishi tells his story. Its a tragic tale of how his people were senselessly hunted and killed by barbaric white men. While the stoic Professor Kroeber teaches Ishi, the professor learns a great deal about life and feelings in return.

Animals are present in various scenes. Horses and mules are ridden. Dogs on leashes pursue Ishi, his mother and sister in a flashback scene and a raven walks on a rock. A hunting scene in which a deer is killed with arrows, was shot in cuts. Establishing shots were filmed of a live deer, then the scene cuts to a dead deer lying on the ground with arrows piercing its body. The live deer was filmed in a fenced in area, and walked from one handler to another. To get the effect of the deer being startled as the deer is shot with an arrow, one handler clapped their hands. The deer had a special effects arrow affixed to its side with stage blood around the area to simulate a wound. The deer was not harmed in any way. The dead deer was a road kill obtained from the Department of Fish and Game. There's a scene where Indians are carving up a dead bear in a field. They have killed the bear for food. The bear was obtained from a taxidermist and "doctored" with body parts obtained from a butcher shop. A bear's skull that Ishi digs up was borrowed from a taxidermist. A taxidermied buffalo and mounted deer's head were rented props.