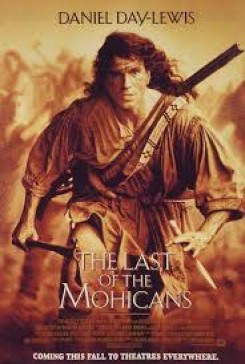 Last of the Mohicans, The

Based upon the classic novel by James Fenimore Cooper, the story of The Last of the Mohicans is set against the backdrop of the French-Indian wars in the wilderness of the English colony of New York during 1757. England and France are at war for the possession of a country neither one was destined to retain. Native Americans fought on opposing sides, the Huron tribe fighting with the French, and the Mohicans with the English and American colonists. The daughters of Colonel Munro, Cora and Alice, begin a journey through the wilderness to join their father at Fort William Henry, which is under his command. They are accompanied by a small contingent of militia and their guide for the trek, Magua, a Mohawk Indian. Along the way they rendezvous with Major Duncan Heyward, a childhood friend, who has been assigned to serve under Colonel Munro at the fort. Heyward is in love with Cora and wants to marry her. Although Cora's feelings for him don't go beyond friendship, he convinces her to consider his proposal. As they make their way through the forest, they are attacked by Huron Indians. It's an ambush that they were led into by Magua, who is not a Mohawk, but a Huron, and a spy. Most of the party are slaughtered, but the women and Heyward are rescued by Hawkeye, a frontiersman and two Mohicans. In order to hide their trail, Hawkeye releases their horses on their own and they continue to travel on foot to the fort. Hawkeye, the man who has become their guide and savior is Nathaniel Poe, adopted by Chingachgook, a Mohican and raised with his Mohican brother, Uncas. These three lead the women to their father, but when they arrive at the fort they find it under siege by the French. What follows are the intrigues of a frontier war and a clash of cultures as Cora and Hawkeye fall desperately in love with each other.

The film's opening scene is a deer hunt in which Hawkeye, Uncas and Chingachgook pursue an elk through the woods. The elk is seen running and at the moment of impact, when it is shot, it tumbles over a hill. The camera does not linger on the dead animal, but on Chingachgook, who chants in Mohican that they are sorry to have killed him and asks the animal's forgiveness because they honor his courage, speed and strength. This scene was filmed in cuts. The deer was filmed separately and the actor's aiming the rifle and shooting were filmed on a different day. The real elk was not pursued in any manner but merely filmed running from A to B within a fenced area. At the point where the elk is shot, a taxidermied elk mounted on a dolly on a track, was used. The taxidermied elk was pulled on the dolly in such a manner that when it reached the end of the track, it tumbled. The same taxidermied elk is used again in the scene where Hawkeye and the two Indians take their kill to the settler's cabin for dinner. The elk is slung over a horse. Dogs are also seen as atmosphere around the settler's cabin in this scene. Because the film takes place in the 18th century, horses are seen throughout, either as carriage horses or pulling wagons, or with riders mounted on them. During the ambush scene a horse and rider are injured and the horse falls over sideways. This was accomplished with the help of a stunt person on a trained falling horse. The area where the horse fell was properly prepared to cushion the horse's fall and the rider merely signaled the horse with a pull on the rein as to where and when the horse should fall. The wound on the horse was painted on with non-toxic make-up. A trained rearing horse was also used in this scene. A stunt person doubled for the actress. When they approach the besieged fort, oxen and horses can be seen walking and hauling various loads while gunfire and cannons explode in the background. The animals were not close to any of the explosions, most of which were lighting effects with much of the explosive and gunfire sounds added in post production. The oxen teams pulling carts and the horse teams pulling a carriage were all driven by trained handlers. There is a second ambush scene when the Colonel is betrayed after agreeing to a truce and surrender. After the Colonel, his daughters, some settlers and militia have evacuated the fort, they are ambushed. Although there are two or three horses present, it is basically a hand to hand battle and does not involve the horses, except for Colonel Munro. He is on horseback when his horse falls, pinning him underneath. This scene was filmed in cuts. A trained horse was used for this scene. The horse was cued with a pull on his rein to rear and then fall on soft ground. A veterinarian then sedated the horse for the part of the scene where the Colonel is pinned under his dead horse. The horse was sedated for 25 minutes with a veterinarian and a representative of the Greenville Humane Society present throughout. The production company had attempted to film this scene without sedating the horse, using a fake horse. However, when the fake horse appeared to be too obviously phony they decided to film this scene with a sedated horse. Dogs are present, primarily as atmosphere, in several scenes. As Cora embarks on her journey to join her father, she observes a cougar in the forest, watching them as they pass through. The cougar had no action, just a "sit" and "stay".