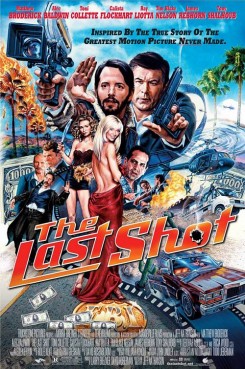 Director-screenwriter Steven Schats (Broderick) finds a big-time producer to finance his latest movie project but soon discovers that the producer is actually an undercover FBI agent running a mob sting, and the movie shoot is just a front.

The Glendale Animal Shelter in Glendale, California, served as the backdrop for the celebrity kennels that appear in the film. All the animals housed in the filmed section of the facility were placed with foster families until filming wrapped. As a precaution, the kennels were cleaned and disinfected prior to placing the various canine "actors" in them.

In one kennel scene, Valerie (Flockhart) picks up a Pomeranian and holds a knife to its throat. Joe (Baldwin) persuades Val to release her hostage, and she eventually hands him the dog. The actress used a rubber knife for this shot and the action didn't upset the dog.

Trainers used hand signals and various toys to get the caged dogs to bark and look around.

Tired of being left home alone every day, Sasha the dog commits suicide in the family hot tub. In a flashback scene, Sasha peers into the water and then jumps in. This scene was filmed in two separate shots using a Border Collie named Fly. Production built a special platform around the tub for Fly to securely stand on, and the trainer placed a toy in the tub to elicit looks from the dog.

For the suicide jump, crew members drained the tub, and producers set up a second cushioned platform in the tub. Fly had been agility trained, so jumping from one platform to another was a piece of cake.

In a spoof of the classic television show Bonanza, one scene features a man riding on horseback through a Western town while a second riderless horse runs by. Trainers hitched a horse and wagon and positioned them on mark in the background for this scene. A stunt rider doubled for the actor, and the riderless horse was released and verbally cued to run to an awaiting handler across the set.

Per American Humane's Guidelines for the Safe Use of Animals in Filmed Media, the horses' path was checked for obstacles or holes that could cause accidental injury. This was especially important in this case, as one horse ran without a rider. Trainers on foot and on horseback surrounded the area during filming in case the animals decided to wander.

One scene features a horse and rider as they leap from a train car at the station and ride off into the parking lot. An experienced stunt rider doubled as the actor for this scene, and several strategically placed cameras made the leap look higher than it really was. The train car was specially built with padded ramps leading to both sides of the car, and for added safety, crew members piled sand at the end of the exit ramp to cushion the horse's jump.

American Humane's Certified Animal Safety Representative on-set made sure the parking lot was closed to traffic, and they checked that the grounds were free of any debris that could pose a trip hazard for the horse.

Steven looks over a few donkeys that stand on the sidewalk with a man. A trainer doubled as the actor for this brief scene; he held the animals by ropes as the actor walked by and petted them.

In one scene, seagulls flock at a dumpsite while a machine pushes garbage into a pile. The seagulls were naturally attracted to this machine, and so they were able to be filmed documentary-style amid the trash.