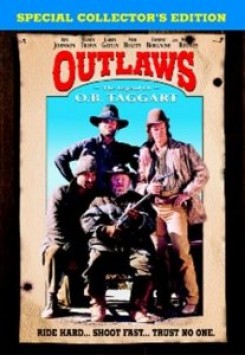 Outlaws: The Legend of O.B. Taggart

The Legend of O.B. Taggart is a western saga of O.B. and his three sons. O.B. has been released from prison after serving twelve years for a bank robbery. His friend, Irish, stashed the money from the robbery in the same bank from which it was taken until O.B.'s release. Shortly after O.B.'s reunion with his sons, they are confronted by Jack Parris, brother of O.B.'s late wife, who is determined to kill O.B. for the murder of his sister. Before he can get to him, O.B'.s retarded son, Slo, cuts Parris' neck and he is left for dead. Only later do they find that Parris did not die after all and is in hot pursuit of not only O.B., but his son, Slo, as well. As they ride off in the direction of Placerville, where the money is hidden, the Taggarts run into a little person by the name of Piggy who is riding a mule. They learn that Piggy has found gold and is about to register a claim. After chasing Piggy, Gale, another one of O.B.'s sons, shoots and kills Piggy in cold blood. Later, the Taggarts come to the farm of Sam Lawrence where they tell Sam that they have intentions of obtaining a homestead nearby. As a result, the Taggarts are invited to dinner and offered the bunk house for the night. They graciously accept, however, Gale begins to tease Slo, telling him about how pretty Jenny Lawrence, Sam's daughter is. Because he is retarded, Slo approaches Jenny the next morning as she milks the goat. He touches her,which sends her screaming and crying to her father. Sam Lawrence comes out with his shot gun, at which time O.B. comes out unarmed to explain Slo's mental problems. When Sam puts his gun down, Gale shoots him dead. The Taggarts once again head out on their way to Placerville. Once they reach Placerville, they approach the Sheriff who was responsible for sending O.B. to prison. O.B. reassures the Sheriff that he is a changed man who has learned his lessons. Because his sons have turned out the way he used to be, O.B. wishes he could share those lessons with his sons. Shortly after arriving in Placerville, the Taggarts wander by the saloon where they see Jack Parris sitting at the bar. O.B. approaches him professing his love for Parris' sister, saying that they should let bygones be bygones since life is so short. Parris agrees, and opens his coat pocket to pull out the locket that O.B. had given his wife. When Parris reaches into his pocket, Gale thinks he is going for a gun, so he shoots and kills Parris. They check into a rooming house, O.B. leaves Slo by himself in the room they share, telling him to stay put. Once O.B. is gone, the proprietress' daughter comes upstairs and teases Slo. Slo becomes so confused and frightened that he throws the fifteen year old girl onto the bed, gets on top of her and breaks her neck. He then runs out and heads for the hills. When O.B. learns of Slo's latest fiasco, he sets out to look for Slo. Upon finding Slo, O.B. has no other choice but to kill his beloved son who has created so many problems for so many people.

There is a scene in which Gale, while on horseback, shoots a rabbit for food. This scene was filmed in cuts. We see an establishing shot of the rabbit. Then we see the gun being fired. The rabbit was not around when the gun was fired. On two other occasions, shots were fired from horseback. In all of these scenes, for the protection of the horses, quarter loads were used and cotton was placed in the horses' ears. Horses are also seen in the background, being ridden and pulling wagons. These scenes were all simple A to B action. In one scene, we see an actor on his mule. Again, this was simple A to B action. A hawk which is seen circling over head, was stock footage. Other scenes with animals such as cows and chickens were background only.