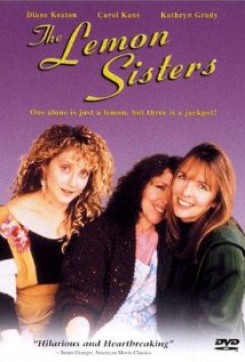 Set in 1979, a time of transition for Atlantic City, New Jersey as it replaces its decadent boardwalk hotels with glitzy gambling casinos, The Lemon Sisters traces the friendship of Eloise, Nola and Frankie. The three friends must break up their act as the night club where they've been singing faces the wreckers ball. Eloise (Diane Keaton) has a house full of cats which she insists upon keeping in spite of an asthma condition. Frankie (Carol Kane) attempts to go it alone as a singer, but achieves only moderate success after she satirizes her own performance. Nola (Kathryn Grody) and her husband (Elliott Gould) loose all their money in a failed business investment, but her friends come to her rescue. Although the plot is nearly non-existent the three leads are always a delight to watch.

Apart from the cats that Eloise has everywhere, a rabbit is seen briefly as a part of the women's night club act. Seagulls are part of the scene on the Jersey shore.