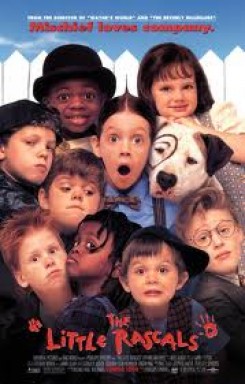 In other mild background animal scenes throughout the film, we see Petey and Elmer with the rascals. In these scenes the animals are usually sitting or lying near the group. Trainers were always on hand giving the animals verbal and hand commands and rewarding them with food. At the end of the movie, many of the rascals find themselves thinking that girls aren't so bad after all. Elmer even gets together with the organ grinder's monkey and they kiss, hold hands, and jump up and down. For this scene, the trainers placed the monkeys on a table in the clubhouse and cued them to do the tricks.