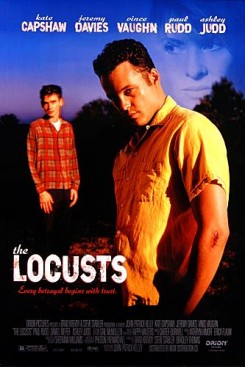 The Locust is a story about Clay, a drifter, who gets a job on a cattle ranch in a shanty town outside Houston. Clay becomes entangled with the family members, a mother and her son, and their problems which include an incestuous relationship.

Horses and cows are seen throughout the film. In most scenes, the animals are in the background used as atmosphere. Some horses are seen being ridden in and around the ranch. Cows are seen in barns, pens and being feed and watered by the ranch hands. There are several scenes of a boy in his late teens taking care of an old bull. There is a scene in the film where it is branding, dehorning, and castrating day at the ranch. All of theses scenes were filmed documentary style. The actual castrations and dehornings were filmed on a working ranch where such procedures are the custom, and were not staged for the making of the film. The production company, accompanied by an American Humane Representative, set up a camera at the spot where the work was to be done and merely turned it on. The actors were filmed separately and inserted into the scene during post-production. Any animal organs seen in the film were fake. In another scene, the owner, Mrs. Potts, drives Jim, (the bull), from his pen during a storm. Mrs. Potts supposedly whips the bull as she moves him from his pen to the bull pen. This scene was shot in cuts. The wrangler placed the bull in his corral. The actor simulated whipping the bull as the wrangler coaxed him along with a bucket of grain. The bull responded to the verbal commands of the wrangler and the shaking of the bucket. After the bull is in the bull pen, the actor simulated the castration. Then there is a brief shot of the bull in the dipping cage being lowered into the antiseptic. The next morning the bull is seen lying on the ground, blood splattered and dead. The wrangler had the bull do a "lie down". The blood seen on and around the bull was fake prop blood. Other animal action consists of a spider seen on a web and a bird flying from point A to B.