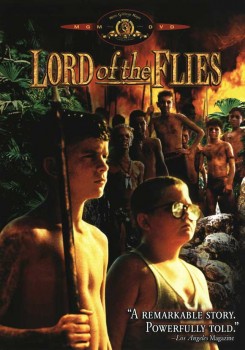 Lord of the Flies, The

Based on William Golding's novel, this is the story of a group of prep school boys who become stranded on an island and degenerate into savages.

"This production was filmed in Jamaica and no humane representative was present. The boys first hunt and kill a lizard which they cook on their campfire. According to the production company, fake lizards were substituted for the live when the lizards were killed. In another scene, a puffer fish is speared. The fish was obviously alive when it was speared as it was still moving when the spear was lifted. The boys find a dead pig on the beach and poke at it. Later the boys hunt and kill a pig. Although you don't see the kill, you do see a dead pig being laid on the ground as one of the boys cuts its throat. The head of the pig is placed on the end of a stake where it attracts swarms of flies. It is shown in various stages of decay thoughout the film and is used as a symbol for the boys' decadence. The production company obtained the dead pig from a slaughter house and used the actual head in filming.
Because an animal was actually killed during the filming, in the case of the puffer fish, we are rating Lord of the Flies ""Unacceptable""."