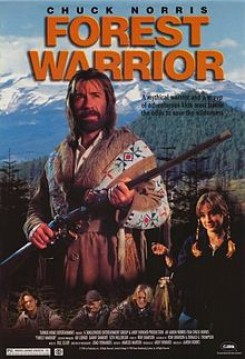 Lords of Tanglewood, The

The Lords of Tanglewood is about the legend of McKenna, a man that lived on the mountain of Tanglewood in 1875. He was murdered by cutthroat's who wanted his trees for railroad ties. The legend states McKenna's spirit is a shape shifter who can change from a man to a bear, wolf, or eagle in the blink of an eye. He is the protector and would stay forever to protect the mountain, everything that lived there, and everyone who loved it.

An adult black bear is seen several times. In one scene he is pawing at an actors hand to wake him and supposedly drags the actor out of the water. For this scene, the trainer doubled for the actor and the bear followed his trainers commands. The bear is also seen in a few scenes standing up and pawing at the air or digging on the ground. For these scenes, trainer A placed the bear on his mark and cued him to stand on his hind legs and drop. When he walks off into the forest, trainer B, out of camera range, uses a buzzer to get the bear to go to point B. In one scene he growls at a wolf and the wolf runs off. In another scene he supposedly heals an injured little girl and an injured baby bear. For the scenes where the bear is next to people, two spotters and "hot wire" (with no electrical current) were used as a visual barrier to keep the animal from getting too close to the actors. Three trainers were present at all times when the animal was working. The bear would focus primarily on trainer A, and trainer's B and C would be out of camera range to either assist in accomplishing the bear's actions or to serve as backup for safety precautions. A black bear cub with a ripped rag on his neck is seen throughout the film. He first appears in a tree-house, but when a few kids, who are on a camp-out, arrive, he walks by them and runs off into the forest. Later, the kids help the baby bear, and he is seen around the kids throughout the film. When the cub was to go to the children and either be petted or licking one of the girls hands, he was released by trainer A and cued with a buzzer by trainer B. Honey was placed on the girls hand to attract the bear and it was a natural behavior to lick the honey. In one scene, he is running from loggers and gets up on a tree stump, where he remains whining, while actors are simulating fighting approximately 15-20 feet away from the cub. To achieve this scene, trainer A released the cub and trainer B cues the cub to the top of a 6 1/2 foot dead tree with a flat top. Trainer B held bait out of frame on a "paystick" so the cub would reach toward the bait. The cub was very vocal and "cried" at the sight of bait. He was allowed to climb at his own pace and he remained on top of the tree of his own will, no tie downs were used or needed. He is also seen walking along another tree stump partially protruding from the water at the lake. When a branch breaks, he falls in the water then gets out and shakes the water off. In other scenes, he is seen chasing a butterfly, sniffing a toad, climbing a tree, walking on a log, playing with a toilet paper roll, or eating fish. An eagle is in a few scenes flying in the sky and also seen "shape shifting" into McKenna. For these scenes, trainer A stood approximately 50 yards away from camera and released the bird towards trainer B who cued the bird with bait to land on a gloved arm held just above the lens of the camera. In one scene McKenna releases a raccoon that is supposedly trapped under a space between some logs. For this scene, trainer A placed the raccoon down in depression under a log with grapes as bait. Trainer B stood in place offside of a log in a hole, holding the raccoon in place until the actor picked the raccoon up. A raccoon is seen again on a truck eating as he watches the actors fight. A flying squirrel also watches the fight as he is sitting on the hood of the truck A skunk comes up, supposedly "sprays" the bad guy and walks off. All wildlife performed was natural behaviors with the exception of some animals conditioned to go from point A to B with the use of a clicker. All scenes involving shape-shifting from animal to human form were accomplished with the use of computer generated images. In most instances this is achieved by combining the still shots of the animal with the still shots of the human and then enhanced through computer graphics. Other animal action consists of a wolf seen drinking from a stream, running, growling at an actor, and "shape shifting" into McKenna. An owl and her baby are seen in a few scene's in a tree along with a badger and another bird also seen in a tree. There is a brief shot of a dog standing watching some children ride by on their bicycles. The above mentioned animals were placed on their mark by their trainers and given verbal or hand commands to cue them. A snake is seen slithering around a child's neck and laying in a sleeping bag while the children are asleep. Later a girl is seen picking the snake up and walking off with the reptile as she talks to it. The snake was placed on his mark by the trainer and retrieved at completion of the shot. A fish is seen wiggling on a line and some are seen hanging on a line as the baby bear cub sniffs them. Props were used and no live fish were killed for these scenes. American Humane was assisted by the Hood River Oregon Animal Control to monitor animal action.