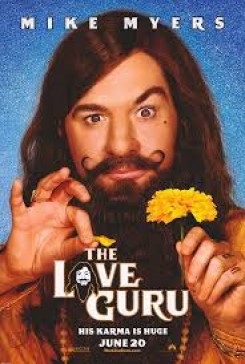 Guru Pitka (Mike Myers) is called upon to settle the romantic troubles and career of a star hockey player whose wife left him for a rival player.

Dogs and Elephant Outside the airport, we see a few dogs in cages. As the camera pans down the row of cages, we see a big cage with an elephant inside. The cages were checked for safety ahead of time and placed on the ground. A trainer placed the dogs inside the cages. Another trainer brought the elephant to the set and placed it inside a specially made cage. As Pitka (Mike Myers) hides behind some bushes, we see his elephant standing nearby. A trainer placed the elephant on its mark and stood just off-camera while they filmed this brief scene. As the cast begins to sing and dance at the end of the film, we see the elephant in the background. The trainer checked the grounds for safety before bringing the animal to the set and placing it on its mark. The costumed trainer stood by the elephant during the shot. Rooster Pitka sees a rooster on the porch of a house. He follows the rooster on the porch and then the rooster follows him. Then the rooster attacks Pitka and he tries to fight the bird off as feathers fly. This scene was filmed in separate shots. A trainer placed the bird on its mark on the porch. The trainer then used hand signals and verbal commands to get the bird to walk in a certain direction. The real rooster was replaced with an animatronic bird for the attack. Crewmembers scattered feathers around and used a fan to blow them all over the porch. Peacock A peacock is standing in front of a temple as a man walks by. A trainer placed the peacock on its mark and stood just off-c amera. The peacock just acted naturally as the camera rolled. Goats Pitka sings a song as he stands in a field with some goats around him. The goats were placed on their marks and some food was scattered around to entice them. Trainers stood just off-camera to retrieve the goats when the scene was over. The grounds were checked ahead of time to make sure it was safe for the animals. Production provided documentation on the animatronic elephant and rooster. Due to late notification or limited resources, American Humane did not monitor all the elephant action.