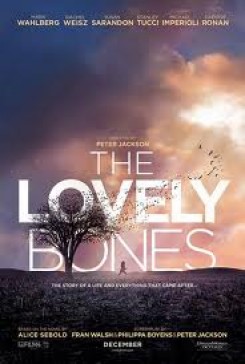 After a young girl is murdered, she spends time in a sort of purgatory, watching her loved ones try to find her killer and bring justice to the family.

Throughout the film, the Salmon family has a golden retriever, which is seen performing such mild action as sitting, standing, being petted and walking or running on- and off- leash. For all of these scenes, trainers used hand signals and verbal commands to cue the mild action, which the trained dog was accustomed to performing. A few other dogs are seen in Susie's (Saoirse Ronan) heaven-like world, and they were also well-trained dogs cued by trainers.

The butterflies in the film were computer-generated imagery, as were the birds that transformed into and from tree leaves. The birds in the sky were filmed in their natural habitat.