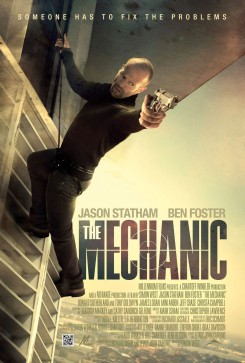 Arthur Bishop (Jason Statham) is the best assassin in the business. When his mentor, Harry (Donald Sutherland) is murdered, Bishop wants those responsible dead.

Bishop goes with his friend to a shelter to adopt a dog. They pass a few dogs in cages, then see a little Chihuahua. The Chihuahua is then seen in a montage performing such mild action as being held or petted and sitting in a carrier or on a table.

The shelter scene was filmed in a working animal shelter, and the kenneled dogs were shelter dogs filmed doing whatever came naturally, except for the Chihuahua. The Chihuahua was a trained dog placed in a kennel after the kennel had been inspected for safety and disinfected. For all the Chihuahua's scenes, trainers used hand signals and verbal commands to cue the mild action, which the dog was accustomed to performing.

For a scene in which a man smokes a cigarette near the dog, the actor made sure to not blow smoke directly at the dog. The set was well-ventilated and takes were short.

All grounds were inspected before filming for hazards and the sets were closed and secured. Cast and crew members were introduced to the animals and instructed on their proper handling.