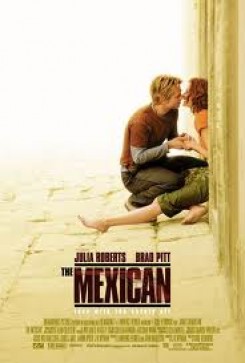 The Mexican is a Pulp Fiction-esque pastiche starring Brad Pitt and Julia Roberts as a dysfunctional couple taking two different roads-figuratively in life and literally in this movie. While Jerry (Pitt) cuts his mob ties by doing one last job in Mexico, Samantha (Roberts) takes off to Vegas for a solo vacation. After 90 minutes of gunfire, bloodshed, and mistaken identities, the duo share their second scene together and are soon forced to decide whether to take the same road back home.

In Mexico, Jerry befriends a menacing dog with a fierce growl. The scary canine was actually played by a happy-go-lucky yellow Labrador named J.J. Non-toxic make-up and a few weeks of "growling training" transformed the golden dog into a mottled and grayish "bad-boy." When J.J. was called upon to snarl, trainers standing off camera would verbally cue the dog with a "teeth" command and the dog would oblige. To keep J.J. looking straight ahead in certain shots, a trainer kept its eyeline by standing directly in front of the dog.

To ensure J.J.'s safety when riding in the back of Jerry's El Camino, a trainer hid in the truck bed and restrained the dog. In some scenes, both the trainer and the dog were restrained with safety harnesses to keep them from moving.

The horses in the flashback scenes were cared for by horse wranglers on the set. There were 17-18 horses and riders in one particular scene, and all but two of the riders were professional wranglers. The cast member on a white horse spins his horse in a few quick circles in order to display an infamous gun-"the Mexican"-to the crowd. The man rehearsed this action with the animal trainers for several days before perfecting the motion.

Although it is AHA's policy that only quarter loads (of gunpowder) be used when firing guns around animals, half loads were used with the restriction that only one take be allowed. The AHA representative on set made this decision after consulting with the horse wranglers, who demonstrated that their animals were used to being exposed to full loads. The AHA representative noted that the horses did not seem alarmed by the half loads.

The other animals that appear in the film-goats, sheep, chickens, burros-were supplied by local owners and were well cared for on the set.

In one scene, Jerry attempts to ride a burro out of a tunnel. The burro was trained to stop on its mark, located just outside the entrance to the tunnel. After Jerry dismounted, the burro turned around and walked back into the tunnel to a food reward.

Later in the film, a character appears to stomp on a mound of ants swarming out of a hole in the ground. The ants that are stepped on were actually rubber. The real ants used in the foreground of the shot were separated from the rubber ones by a line of paraffin wax.

On a final note, the dead cow lying on the side of the road near the beginning of the film was an actual cow that production found already dead. The filmmakers merely decided to incorporate the cow into the scene. The cow was not harmed in any way for the purpose of filming.