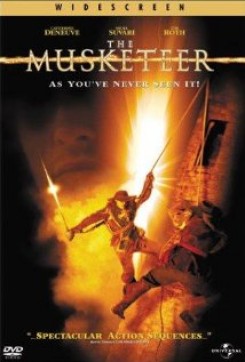 Alexander Dumas' novel is updated with an eastern influence as D'Artagnan attempts to join the king's elite guards, the Royal Musketeers, and find the man who killed his parents.

Although released in America by Universal Pictures, The Musketeer is a foreign film and Production did not contact AHA during filming. After several unanswered inquiries to Production on how the animal action was achieved, AHA cannot confirm nor deny whether intentional cruelty occurred in the making of the film. The following review is based solely on AHA's screening.

A boy swipes an actor on horseback with a weapon. The horse rears up and whinnies.

Extensive horse-riding sequences feature what appears to be hundreds of riders charging with swords. Horses appear in scenes around or near gunfire and/or explosives, causing some horses to rear and fall down. In one scene, a horse and rider dodge tumbling barrels in their path. AHA does not know what nor if any safety precautions were in place during production or whether the horses used were trained to accomplish the stunt action. AHA also has Guidelines that specify how to use gunfire and/or explosives around animals; per AHA, only quarter loads of gunpowder are to be used to avoid injuries to the animal. AHA does not know if this quarter-load guideline was followed.

Several horse-drawn carriages (including one that has a "spare" horse tied to the back of the carriage being pulled) are in shootout scenes. At one point, the carriage goes so fast that the "spare" horse breaks away from the carriage and runs away. Behind the still moving carriage, one man jumps from a running horse to another running horse that is in front of it (rather than beside), while one man hangs from the side of the saddle of a horse that is running beside the carriage. The horses also draw the carriage down a very narrow alley-way at night. AHA does not know what nor if any safety precautions were in place during production or whether the horses used were trained to accomplish the stunt action.

A horse is supposed to be so tired that it collapses on the grass with its rider still on top. The horse lies down completely on its side - everything, including its head, is completely on the ground - and remains still while the rider says 2 or 3 lines of dialogue and walks away. Per AHA Guidelines, animals can not be tranquilized for the sake of filming. AHA does not know how this scene was accomplished.

During the palace feast, dead chicken and duck carcasses hang in the kitchen. There is a large swan centerpiece at one of the dinner tables. AHA cannot verify whether these animals were real, props, food purchases, or if they were killed for the purpose of filming.

A man carries 2 ducks and gives them to another man, who is supposed to slaughter them. He releases them instead.

AHA is deeply concerned about the welfare of the animals used in this film and needs your help in voicing these concerns to the makers and distributors of The Musketeer.

**AHA would appreciate a copy of any correspondence sent to the filmmakers and distributors. You can reach AHA at: