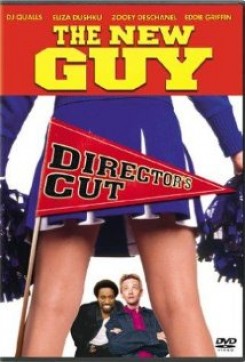 After a few years of brutal unpopularity, Dizzy Harrison (DJ Qualls) gets himself expelled from high school and winds up in prison. There he finds an unlikely comrade in his cellmate, Luther (Eddie Griffin), who gives him some tips on how to remake his uncool image. After his release, Dizzy starts anew at a different high school, earning the respect and fear of all his new classmates. Things go great until a bully from Dizzy's past ends up at his new school to spoil his guise.

In a large shopping mall, Dizzy looks into a fish tank with large fish swimming in it. Dizzy opens his prescription bottle and drops two pills into the tank. As the pills float towards the bottom of the tank, the eager fish eat them. An aquarium supply shop supplied the aquarium and the fish for this scene. The pills were made of rolled up bread crumbs and shaped into pills and the fish heartily gobbled them up. The supplier brought the aquarium and fish—which were all in good health—back to the shop after the scene was filmed.

In several scenes, a guard appears on horseback in the prison yard. The actor was actually an experienced rider and was introduced to the horse before filming began. The actor rode the horse past a row of actors dressed like inmates working in the prison yard. When an inmate tries to escape by climbing over the fence, the guard chases him on horseback. The actor rode the horse at a gallop under the watchful eye of the trainers who stood nearby off-camera.

In a brief scene at the prison, a guard with a dog on a leash walks by several inmates who are working in the yard. The trainer handed the actor the dog's leash and stood off-camera to retrieve the dog once the scene was over. The dog merely walked alongside the actor in the scene.

Dizzy's football coach owns a white horse which he and Dizzy ride during football games. The part of the horse was actually shared by a white Arabian horse named Paris and a white Quarter horse named Bud. All of the actors were introduced to both horses so everyone felt comfortable during filming. In addition, both horses were trained in rearing, jumping, and galloping and an experienced stunt rider was used for the scenes that required the horses to achieve those actions. Several cameras were set up in various locations around the set so many different angles could be achieved for these sequences.