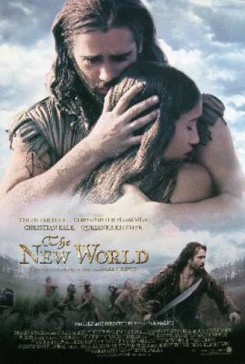 In Terrence Malick's historical epic, Anglo and American Indian cultures clash when the royally chartered Virginia Company hits the shores of this "new world" in 1607. In Powhatan's tribe, the chief's spirited daughter Pocahontas (Q'orianka Kilcher) becomes fascinated with soldier of fortune Capt. John Smith (Colin Farrell) and saves him from execution. When war between these two civilizations eventually erupts, it is the love between Pocahontas and Smith that endures, becoming the stuff of legend.

As the so-called "naturals" interrogate John, one native leaning forward behind the chief has a small green snake writhing through a large hole pierced in his earlobe. A trainer prepped this scene with the actor for a week before filming began. Green snakes are slender, non-venomous, and chiefly insectivorous. The pierced hole, in which the actor normally wears a plug, was a half-inch in diameter and large enough for the snake to move about comfortably. The trainer remained just off camera at all times to step in if necessary to readjust the snake.

In one shot, Pocahontas and John play with parakeets sitting on their arms. Prior to filming, a trainer brought out the birds and allowed them to rest on her own arm while they got acclimated to the set. The trainer also spent time instructing the actors on how to handle the parakeets. The birds' flight wings had been clipped to prevent escape, and trainers stood just three feet away on each side of the camera as it rolled.

In one beauty shot of the forest, a red fox walks along a fallen tree. To cue this action, trainers first placed a light monofilament line around the fox's waist and positioned the animal at the end of the fallen tree. On action, one trainer released the fox while holding the end of the monofilament and a second handler used a buzzer and food rewards to entice the fox to walk 15 feet along the downed tree.

To enhance the natural atmosphere desired by the director, loose dogs often appear around the native camp and the Jamestown fort. Such dogs were brought to the set on leash, released on action, retrieved, and reset after the director called "cut." In each instance, two trainers were just off camera to step in, if necessary, and all animal handlers had radios to communicate with each other and with production, should any dogs get away from the set.

One dog, named "Guy," required a lot of time in the makeup chair to acquire the sickly look the filmmaker desired. Trainers used a non-toxic tempera paint to draw ribs on the dog's torso; petroleum jelly combed into his fur created a general unkempt appearance; green and yellow cake icing, applied well away from the eyes and nose, became "pus"; and foamy egg whites placed on his nose and throat area lent a drooling effect.

Loose pigs frequently appear in a rudimentary pen at the Jamestown fort. This pen was sturdy and safe, and offered shade, shelter, food and water. Puppy pens were used to contain the pigs prior to and after filming each take. On rolling, the puppy pens were removed, and the pigs walked around eating and rooting at will as four unseen trainers looked on.

Production provided receipts for all seafood and other food products used in the film, as well as for the taxidermy animals sometimes decorated with fake blood to look recently killed. At our request, Glen R. Askins, Regional Wildlife Manager of the Virginia Department of Game and Inland Fisheries, submitted documentation regarding the dead animal parts used to re-create aspects of American Indian life.

Askins' letter includes this statement: "The Department asserts that wild animal carcasses used in filming were harvested for purposes unrelated to the production of the movie. The animals and birds were made available as a result of normal wildlife management practices and crop damage alleviation."

The letter fulfills American Humane Association guideline no. 1-18: "If dead animals or animal parts are purchased from or provided by a taxidermist, an animal shelter, slaughterhouse, food supplier, or other source, American Humane must be provided with documentation that demonstrates that they were destroyed in the normal course of the source's operations and were not killed for the production."