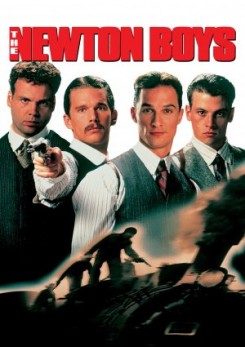 The Newton Boys is a film about the notorious bank/train robbers, the "Newton Brothers". It chronicles their life as criminals after their capture by the Federal Government.

Late one night, the boys are attempting to rob a small town bank when a man with two horses and a buckboard come riding down the street. The man is warned to hurry and leave but he does not heed the warning and travels on past the bank. As he nears the bank an explosion is heard and seen. The horses, reacting from the sound, become skittish and one rears. The man gains control of the team and then rides out of town. This scene was shot in cuts. The horses were in a safe blow circle and all debris was made out of balsa wood and candy glass. As a safety precaution, the horses were fitted with special shoes (made out of rubber with vet wrap over a blend of horsehair and mud), to give the appearance of hoofs. The horse that rears was a trained rearing horse and was attached by a lead to the other horse, which does not rear. This was done to insure that the horse, which reared, could not fall if he lost his footing. A fifth wheel wagon was attached as an added safety device. All of the curbs were removed from the street so that the wagon would not accidentally come into contact during a turn and tip the rig over. The driver in the scene was the actual owner of the horses.

In another scene, three men are on horseback being chased by some other men in a car. Shots are heard as the men in the car try to stop the men on horseback. One of the horses is supposedly hit and the man and horse go down. This scene was shot in cuts. A trained falling horse was used. Again only experienced riders were used and additional wranglers were placed in and around the area. Quarter loads were used and through special cinematography, the horses appear to be closer to the vehicle than they actually are.

There are two scenes where a few men are seen trying to "break" a horse. This scene was shot in cuts using professional wranglers and stunt doubles. A shot was established with the actor and then professionals were used for the remaining portions of the scene.

There are several scenes where horses are being ridden in and around towns and farms. Professional riders were used for all of the background shots. Additional wranglers were strategically placed around the area, to ensure the safety of all of the horses.