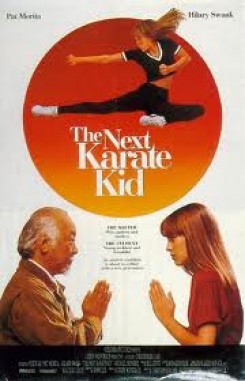 Next Karate Kid, The

Mr. Miyagi is back and he takes a new pupil under his wing a troubled teenage girl

The Next Karate Kid is the fourth installment in the Karate Kid series where Mr. Miyagi teaches the discipline of the ancient art to a young woman. When the widow of Mr. Miyagi's old war buddy has trouble with her belligerent granddaughter who can't seem to express all the anger she feels after having lost her parents in an automobile accident, she turns to her old friend for help. Mr. Miyagi offers Luisa Pierce the use of his home in California to give her and her granddaughter, Julie, some time apart. In turn he stays at Luisa's home to care for the house and Julie, and in so doing, helps the young teen to channel her anger into a more positive direction - karate. Julie is an angry and hurt teenager who hates school, homework and the pleadings of her grandmother. Her only friend seems to be a hawk, Angel, which she has rescued after it was shot accidentally. She cares for the bird secretly, keeping it in a large cage on the roof of the high school which had been used by an old janitor to keep pigeons. At night, she sneaks into the building and up onto the roof in order to feed the bird raw meat and to tend it's wound.

Mr. Miyagi takes Julie to a monastery where he will begin teaching her to master karate. On the way they stop at a gas station. Julie goes into the station to pay for the gas and encounters a mean Doberman who growls at her. Mr. Miyagi approaches the dog and calms it down. The owner becomes angry because his dog has reponded to a stranger and orders the dog to attack Mr. Miyagi. The dog refuses to attack so the owner and his friends decide to fight Mr. Miyagi themselves. They have no idea with whom they are dealing and lose this fight.

Upon their return from the monastery, they find the hawk missing from its cage. Members of a pseudo-military club have turned the hawk into animal control. Mr. Miyagi takes Julie to animal control and they get Angel back. Realizing that Angel is healed and ready to be set free, they release the bird into the wild. Mr. Miyagi gently removes the gauze bandage from the bird's wing and they go to a wilderness area near a lake. Julie releases the hawk which circles and then flies back to her. She releases it a second time and the bird flies free over the lake.