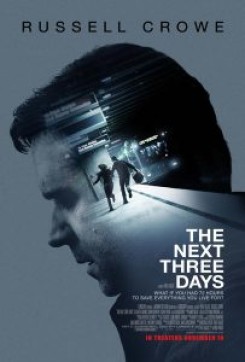 Next Three Days, The

John (Russell Crowe) must find a way to help his wife, Lara (Elizabeth Banks), when she is accused of murder.

Throughout the film, George (Brian Dennehy) has a pet dog, who is seen performing such mild action as sitting, standing, lying, being held or petted, and walking or running on or off leash. For all of these scenes, trainers used hand signals and verbal commands to cue the mild action, which the trained dog was accustomed to performing.

John runs to his parked car and jumps in just as a dog runs up to the car and jumps at the window. John starts the car and backs up as the dog and a thug begin to chase the car. The thug fires gunshots at the car. A trainer held the dog on a leash then released it, cuing it to run to the car and jump up. The car was driven slowly a few feet while the dog was cued to run with the actor. The gunfire was pantomimed.

A dog bites a man's leg and is taken away by its collar and put into a closet. The actor wore a padded stunt outfit, and the dog's favorite toy was hidden in the pant leg. Off-screen trainers used a combination of verbal commands and hand signals to get the dog to "bite" the actor's leg. The actor exaggerated the action of taking the dog into the closet, making it appear as if he was pulling harder on the collar than he really was. A trainer was hidden in the closet.

The sharks were filmed in their natural habitat at a local aquarium.