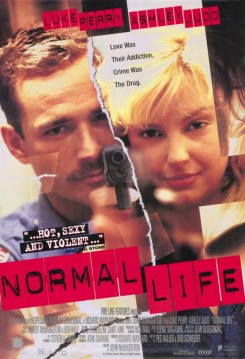 The Normal Life was a film inspired by a true story about a young couple, Chris and Pam, and their undying love for one another. In the opening scene, Chris and Pam are in the process of stealing a car when the authorities arrive. They arrest Chris, but before they can reach Pam she drives off in the couples van. After being put in the squad car, Chris hears the chase scene as it unfolds on the police radio. The story then flashes back to two years earlier, as we see the events that brought the couple to a life of crime.

Chris is a Kenyon County policeman when he meets Pam, his wife. He will do anything to give Pam what she calls "the normal life", which is a house, children and a dog. Her lust for living life on the edge and her drug/alcohol addictions eventually get her fired from her job. After a disagreement with his co-workers, Chris also loses his job. This puts a strain on their already troubled marriage. It is just the beginning of their problems as Pam's abuse and irrational spending increases. Chris is trying to hold down two jobs to make ends meet. After coming home one night to find Pam passed out, they have a huge fight. The next day Chris brings home a puppy, hoping that this will bring Pam out of her depression. It cheers her up for a while but soon she is heavily into drugs and alcohol again.

In a desperate attempt to save Pam from a life of drugs and depression, Chris turns to crime. He robs several banks, which gives him the means to give Pam the rest of what she wants, a house. When Pam finds out what Chris's new job is, she begs him to take her with him. Since Chris has never been able to deny her anything in the past, he reluctantly agrees. Unbeknownst to Chris, however, the police are on to him and are waiting at the site of his next heist. It is at this point that the story returns to Chris sitting in the back of the squad car listening as Pam takes her own life, as she is surrounded by the police.

Animal action consists of the use of both a golden retriever puppy and a golden retriever adult dog. The puppy is seen, in several scenes near the beginning of the film, either sitting on the bed or being carried by the actors. Later in the film as the dog is supposed to be grown, the adult dog is used. He is seen walking with the actors, sitting on a bed, or a couch, and getting in and out of the van. In one scene, Chris and the dog, while on his leash, share a morning jog.

In another scene, Pam and Chris are having an argument in the living room of their home. The dog is seen lying on the floor beside the coffee table. Then we see Pam throw the gun she has in her hand onto the table, breaking the glass. A yelp is heard off camera. The dog is then seen getting up with his tail wagging. He follows Pam up the stairs. The scene was shot in cuts. The dog was not present when the actress threw the gun on the table. To get the dog to follow Pam up the stairs, the trainer merely placed the dog on his mark and with verbal commands cued the dog to come to him at the top of the stairway. Food was given as a reward.