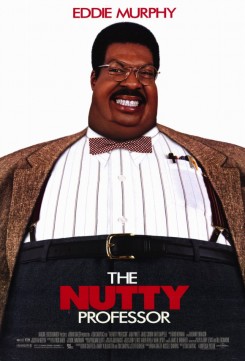 In this revised remake of the 1960's Jerry Lewis comedy, The Nutty Professor, an excessively overweight professor, Sherman Klump, takes a Dr. Jeckyl and Mr. Hyde approach to winning the girl. Klump has been studying the genetic make-up of laboratory hamsters and finds that there is, contained within the DNA, a particular gene that causes one to be either naturally fat or thin. Upon meeting a beautiful young chemist named Carla, he begins experimenting on himself, transforming his fat physique into a sleak one, in an attempt to win her love.

The Dean of the university is particularly annoyed with Sherman, since his hamsters have begun to overrun the campus. Hamsters are everywhere - flowing out of heating ducts, running up students' pant legs, being shot out of leaf blowers, falling into coffee mugs and causing traffic accidents as they overflow their cages and run in pacts through the campus. However, on top of the chaos, the dean is stressed and adamant about getting a particular grant based on Sherman's research. With the campus thrown into a state of mayhem, the chances begin to look slim. Sherman's job is on the line as well as his research. But, none of this is quite as important to him as winning the affections of Carla. Based on the results of research on one particularly obese hamster named Shelley, Klump decides to become his own guinea pig. Sherman literally shrinks into his alter ego, Buddy Love, and in so doing begins to win Carla's attentions, but wreaks havoc on himself and the university.

Animal action is extensive in the beginning of the film consisting of the use of hundreds of hamsters. The animals were trained in pre-production and filmed both on set and against a blue screen. Throughout the film, real, animatronic and plush toy hamsters were used, although there were as many as 380 live animals employed.

The film opens with a sequence in which the army of hamsters overruns the campus. This was shot in cuts and specially built shoots, platforms, treadmills and catch cages were arranged for the different incidents that, when edited together, create the effect of thousands of hamsters causing pandemonium. When the hamsters are seen pouring out of a heating duct into a room, the animals were guided by trainers through a specially designed shoot which led to the simulated vent opening designed by the production company. Once through the opening, the animals were guided by other trainers who used low speed cool-air blowers that directed the hamsters across the floor to catch cages where there was food. The animals were released in groups of sixteen at a time. In pre-production, the hamsters were first prepped individually and later were grouped and taught to run together. The use of warm and cool air blown on the release cages encouraged them to leave these cages. As a positive reinforcement, they learned that a cool, dark and roomy cage awaited the end of the run. The hamsters were fed freely and not run for food. During filming, the blowers were used both indoors and outdoors to direct the hamsters.

When the hamsters are seen running through the halls of the university, both real and fake hamsters were used. Several live hamsters were released by trainers in front of the camera, but in the background, toy hamsters were pulled along the floor by monofilament while actors pretended they were frantically avoiding them. For the other scenes in the sequence where people are seen trying to avoid large numbers of hamsters in classrooms, on the campus lawns, on the campus stairs, benches, etc., plexiglass and wooden barriers were placed around the set to insure that the animals could not wander off and to separate them from the areas in which there were actors. Many fake hamsters were used close by the actors. For the shots where several real hamsters needed to be placed outside the protective areas, trainers were intersperseed among the actors and stayed close to the animals. After each take, the actors were told to hold position until all the hamsters were collected and counted.

In several shots, blue screen simulation was used in conjunction with the combination of real and fake animals. The hamsters were filmed in front of a blue screen, either walking separately, or in groups running A to B. Later these shots were superimposed into the campus mayhem sequence to make it appear as though a great many more hamsters were loose on the grounds than were released at the actual filming location. For close up shots, the hamsters were placed briefly on a slow speed treadmill made of non-slip rubber which was only eighteen inches long and had all moving or potentially dangerous parts covered up. Trainers were present to place the animals and to catch them is they stopped walking. Several hamsters were filmed in rotation and each animal was used for less than a minute.