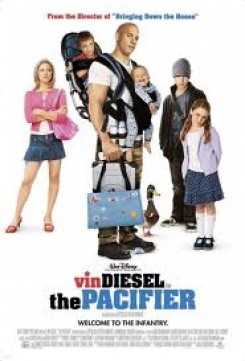 This film met the Guidelines established by American Humane, received the Monitored Acceptable rating, and was awarded the "No Animals Were Harmed"® End Credit Disclaimer.

Featured animal scenes
The Plummers' pet duck "Gary" appears in the background throughout the film. This Mallard can often be seen walking or standing on the kitchen counter, standing on a living room table, or sitting on a chaise lounge. Anywhere the family hangs out, Gary is right beside them. Five different ducks were used to portray Gary: one flying duck, one "stay" duck that simply held its position, and three "worker" that fulfilled the point A to point B action.

In one scene, Gary walks on the kitchen counter and nibbles Shane's ear. The trainer cued the duck verbally and with a beeper to walk from point A to B and offered a food reward upon completing the action. Later, Gary flies high across the room. For this action, one trainer released the duck and a second handler cued the bird with a laser, buzzer, and food pay to fly into his crate at the end mark.

Gary and the grate
Gary follows Shane to the garage in one scene and gets his foot stuck in a grate on the garage floor. He struggles to get free and Shane releases him. The duck used for this sequence was extremely well trained, and handlers conducted a safety meeting with production to ensure that, per American Humane Guidelines, the path to and from the grate was cleared of all cables and sharp objects.

Crew members taped and padded both sides of the grate and the duck had a safety release line attached to one foot in case he panicked for any reason. One trainer hid in a crawl space directly below Gary, while a second handler gently slid the bird's foot through a space in the grate and stood off camera cooing to him. To make Gary flap his wings when Shane walked up, the trainer hidden below tickled the duck's foot. For the shot, Shane did not actually remove Gary's foot from the grate; this was done by the trainer after the director yelled cut. The actor merely shined a flashlight into the grate to "examine" Gary's foot and put his fingers under the duck as if to release him. According to American Humane's Safety Representative on the set, actor Vin Diesel was fabulous about the comfort and safety of his waddling co-star.

Dynamo duck
During the standoff between the police and the bad guys, Gary shuffles onto the driveway and attacks the villain's crotch on Shane's well-timed command. To accomplish this action, trainers started by prepping the duck with a life-size mannequin wearing pants that had a Velcro rip-away crotch. The duck was laser-trained to go for the crotch and then receive food pay. After mastering the mannequin, the duck graduated to a stunt person with a rip-away crotch. Finally, for the actual filming, the real actor appeared and no rip-away patch was used for the final take. According to the trainer, the duck felt very comfortable with the action and seemed to not care who wore the pants for this scene! No duck was in the area when the bad guy fell to the ground.

Other animal action
In one scene, little Peter stands in a fish tank eating a bowl of dry Cheerios. Although the aquarium contained goldfish at other times during filming, for this shot, production removed all fish from the tank.

The white dog that appears briefly in the background during one scene belonged to an extra on the set.