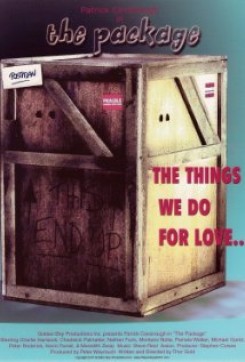 The Package is a short comedy about a young man who so pines for his sweetheart far away that he is desperate to do anything to visit her. Sadly, his pizza delivery job doesn`t quite pay enough to afford him the expensive ticket to paradise. Undaunted, he gets a brainstorm _ why not mail himself to his girl as a surprise package? Why not indeed!

As he awaits Acme Delivery Service pick-up, a neighborhood dog becomes fascinated with the large crate-o-boyfriend just sitting at the sidewalk. The dog expresses his excitement by urinating on the box. His owner does give a perfunctory, "Bad dog!" response, but is actually pretty complacent as they stroll away. The dog was walked A to B and appears behind the large package. The illusion of the dog urinating was accomplished with a sound effect.

Upon delivery, the girlfriend's dog, Boo, appears much happier to see him than she does – actually Boo sees him and she doesn't. The fact that she has a new boyfriend became the surprise for the package. Boo was given visual commands by the trainer and was well rewarded with treats for being such a good little actor.