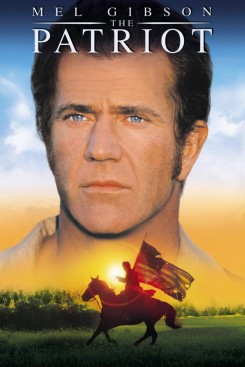 The Patriot is the historic drama of Benjamin Martin (Mel Gibson), a South Carolina farmer and widowed father of seven, and his transformation from a pacifist into a soldier during the Revolutionary War. The film takes the audience through the violence and tragedy of this war to the eventual independence of the American colonies from British rule. The film's central character is loosely based on the life of Francis Marion, known as "The Swamp Fox."

Because much of the horse action took place on a battlefield, monitoring by AHA reps had to be particularly acute. Over six hundred extras were coached by war reenactment groups and historical accuracy was supplied by experts from the Smithsonian Institute. Much of the animal action was during the filming of massive battle scenes that required critical safety planning and a stellar combination of technical effects.

In all scenes where the horse action involved fire, the horses were protected by the application of a fire retardant gel. The fire itself was regulated by a "fire bar", similar to one found in gas fireplaces, so that the flames could be kept low when the horses were nearby, and increased for greater dramatic effect once the animals had been removed from the scene.

Gun and mortar fire required critical safety precautions as well. The noise level was substantially reduced when the horses were in the scene by using a smaller amount of gun powder. No animal was ever closer than 100 feet from the shooting. Any gun mounted with a bayonet that was used around the horses was made of rubber.

Particular attention was paid to the ground underfoot. Trees and plants used for set dressing were always planted in the ground, never staked. In those scenes where horses appeared to be running through cornfields, in actuality, a type of soft grass was used so their hooves would not be cut. In the horse fall scenes, trained falling horses were used and were ridden by professional stunt men with horse experience. Pits had been dug up and soft dirt placed in them to cushion the horses' falls.

One of the more dramatic and large scale precautions taken involved draining twelve acres of a swamp prior to filming so that an underwater road could be built to avoid the possibility of horses slipping and falling.

There was extensive use of artificial horses in the battlefield scenes. In one of the most dramatic moments toward the conclusion of the film, Mel Gibson is seen impaling a horse with an American flag. An artificial horse attached to a ten foot track was used. The horse was manipulated off-camera to move forward on the track, thus creating the impression of a live animal.

There were, of course, other animals used during the filming. In scenes where wild game was caught, quail, pheasant and duck were supplied by a taxidermist. In the fishing sequences, all fish were dead at the time of purchase, and the live crabs were never out of the water for more than 15 minutes.