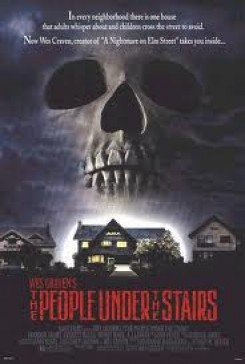 People Under the Stars, The

A ghetto youth, nicknamed Fool, his sister and their ailing mother are about to be evicted from their tenement apartment when his sister's boyfriend, Leroy, devises a plan to rob the greedy landlord and pay back the rent. Leroy believes the landlord keeps a fortune in rare gold coins hidden in his large rambling house. When a friend sent to case the house doesn't return, Leroy and Fool break into the supposedly empty house to search for him and the gold. What they find is a macabre group of people who live in the basement, a strange young man who seems to inhabit the walls in between rooms, and a beautiful young girl who is never permitted outside the house. This assemblage is kept in constant terror from the sadistic couple who rule the household. When the couple return home, Leroy and Fool are trapped in this house of horrors with no way to escape.

In a brief street scene set in the city ghetto, three hungry dogs are seen scrounging for food in an alleyway. The dogs were picking up treats that had been placed around the ground for them and the sound of growling was dubbed in post production. A vicious Rottweiler guarding the house figures prominently in numerous scenes. Four dogs were used to portray the one. The dogs are athletic and, although they do things that look mean and aggressive, they were, in reality, just playing. In scenes where the dog attacks or scuffles with an actor, either a stunt man or trainer doubled for the actor. The dog and double would wrestle, which the dog enjoyed. American Humane was present during their training for specific scenes in addition to being on the set during actual filming. There are numerous scenes where the dog is pursuing either Leroy or Fool and these were accomplished with the dog running from point A to point B, or from one trainer to another trainer who held a squeaker toy. The front door is electrified so that anyone attempting to escape gets a severe shock when they touch the door knob. When the dog has Leroy by the arm (both a padded real arm and a fake arm), Fool and Leroy drag the dog across the floor and grab the door knob to give the dog a shock so that he will let go of the arm. Sparks fly and the dog falls on his side, twitches and appears dead. This scene was shot in many cuts using a real dog, a full-size fake dog and a mechanical dog head. The fake dog was used for the "electrocution". The real dog was then positioned on his side on the floor and cued to "dig". The dog's movement created the twitching effect. Later, when the dog revives and is given Leroy's hand to eat as a reward, it is a fake hand made of gelatin. After Leroy is shot to death, the dog continues to stalk Fool. When Fool escapes the dog by ducking through a heating vent into the heating system between the walls, the dog attempts to force his head through the vent and his head is battered in and out as the boy tries to keep the dog away. This was not a real dog head but a mechanical fake dog head that was being battered in and out. The dog does get between the walls and chases Fool, who tricks the dog into falling through a trap door and down a laundry chute, which enters the kitchen, by way of a cabinet. The dog, at this point, is sitting in a kitchen drawer as he slides across the kitchen floor from the cabinet and bumps to a stop at the far end of the kitchen floor. The dog had been trained to jump down four feet for the trap door effect. He had also been trained to slide down a ramp while sitting on a flat metal sheet. This entire scene was shot in many cuts using a fake and real dog. The dog that went crashing and bumping into the kitchen was the fake dog. Fool escapes the dog again by jumping into an unused furnace and then escaping by way of the heating ducts throughout the house. The dog, however, is tracing his progress by sniffing at the heating registers in various areas of the house. The villain sends the dog into the duct system to chase after Fool and in semi-darkness the dog attacks the boy and there is a prolonged struggle where the dog eventually pins down the boy. A stunt man doubled for the actor and the stunt man wrestled with both a real and fake dog. In the meantime, the villain is on the other side of the wall with a machete listening to the struggle behind the wall. He pierces the wall with the machete and is elated when he hears a moan, thinking he has struck Fool. When he breaks through the wall he finds the dog whimpering his last breath as the dog's bloody head falls through the opening. This, of course, was the fake dog head smeared with stage blood. The People Under the Stairs is a bizarre and extremely violent horror film. However, all of the violence was simulated.