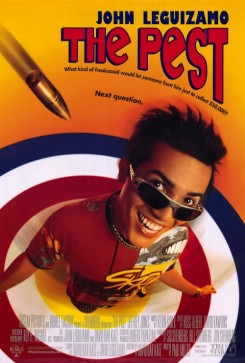 When Pest is on the island he sees a large snake crawling across a tree limb. Later Pest is in the woods sitting down when a snake is seen crawling up his leg. Pest struggles with the snake, thrashing back and forth. A real and a fake snake were used for this scene. For the shot of the snake crawling up the leg, the trainer doubling for the actor, placed the real snake on his leg for the establishing shot and replaced it with a fake one. A fake snake was used when Pest is seen struggling with the reptile. When the snake is seen on the tree limb, the trainer merely placed the snake on his mark and retrieved him at completion of the shot.