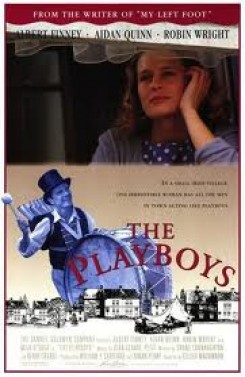 The Playboys takes place in a small village in Ireland, in the year 1957. Nora and her sister live in a modest home and are the town's seamstresses. Nora has just given birth to a fine, but illegitimate baby boy. The town's people badger Nora to confess the father's name. The father of the child is very much in love with Nora, but has promised to keep her secret as Nora does not love him, and refuses to marry him.

One day a traveling show comes to the village on their yearly tour. They are a strange lot of people, all different types. Tom, one of the actors, spots Nora as she fetches water from the well, and falls for her immediately. He pursues Nora. She pays him no attention, but really is quite taken with the young man. The father of Nora's son notices the romance that is developing and becomes enraged. As the town's constable, he does everything he can to keep Tom and Nora apart, but the more he tries the deeper in love the couple fall. By investigating Tom's past he finds that Tom had once been arrested in Dublin for bigamy. He arrests Tom and tells Nora, thinking that she will then marry him. Nora is indeed hurt but goes to Tom to ask him how he could do this to her. He explains that he took the rap for his brother and served three months in his place. The constable realizes that his plan has failed, and that he has lost his dear Nora for good. As the traveling show packs up to go, we see that Nora will indeed go with Tom, baby in tow, and start new lives for themselves.

Animal action includes one scene where Nora and her sister are making breakfast. They discover a dead mouse with it's head in a trap. Nora picks up the mouse and throws it's body out of the door. This was a fake toy mouse.

The morning after a heavy rain, one of the village men discover two of his cows floating dead in a pond. With the aid of his neighbors and a horse, he has the dead animals dragged out of the pond. Cow skins were purchased from a local slaughter house and taken to a taxidermist and stuffed for this scene.

In another scene we see two hunters coming back into town, one with two dead rabbits slung over his shoulder. These rabbits were purchased from a local butcher shop.

In still another scene, one of the town's children has stolen a stick of dynamite from the traveling show's trailer. He and his friends go down to the creek and throw the dynamite into the water, where it explodes. The children then go into the water and start collecting the dead fish that have floated to the top of the water. For this scene an air hose was placed under the water with a high pressure nozzle releasing air into the water causing the effect of an explosion. Dead fish were purchased from a local fish monger and placed in the water. The sound of the explosion was dubbed in after the scene was completed.

Other scenes involving animals included pigs riding in a truck, chickens in a coop, horses mating, Nora riding a donkey, pigs being fed, a dog being walked on a leash, a pigeon sitting on a window sill and a goat and peacocks in background scenes.