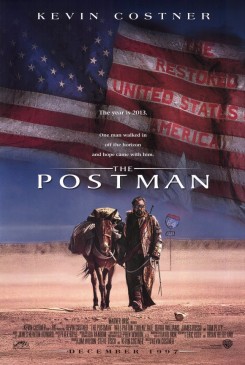 The Postman is a futuristic film, set in the year 2013, centered on life in the United States after the government has been destroyed by a group called the Holnist. One renegade traveler is captured and later escapes from the Holnist prison. While on the run, he finds a Jeep containing a skeleton of a mailman and his mailbag. He assumes the identity of the dead man in order to obtain asylum in local townships. What started out as a means of escape from the Holnist turns into a quest to reestablish communication and form a government to free everyone from the tyranny of the Holnist group.

At the beginning of the film, the Postman and his mule, Bill, encounter some unsavory characters outside of an abandoned 76-gasoline station. The wrangler released the trained mule and it traveled from point A to B up a ramp to the center of the stage and simulated jousting with the Postman. The wrangler placed a wooden sword in the mule's mouth and cued it by touching the mule's body with the actor's sword at which time, the mule would lift its head. The wrangler, with a hand command, cued the mule to bow.

The mule is in several other scenes where he lays down, chases the ball that falls from the 76 station, gets his teeth brushed by the Postman, and walks, trots, or runs from point A to B. The wrangler released the mule and cued him with verbal and hand commands with food as a reward.

The Holnist are camped outside of a gated village and the Postman rides out to speak to Bethlehem, the leader of the group, to try and make a deal. After refusing the proposal, the soldiers rush the gates and gunfire from the cannon is heard exploding all around. This scene was shot in cuts. Experienced riders and trained rearing and falling horses were used. The horses were stopped approximately 160 feet from the exploding gate, which was made out of balsa wood. Multiple squibs were used on the gate along with candy glass for the breaking windows. The horses were never in the immediate area of the explosion. There were cattle in the background and they also were positioned at a sufficient distance from the explosions.

There is a scene where the Postman, after being injured in the battle, is pulled through the snow on a makeshift gurney which is hitched to the back of a horse. Later, the horse dying from starvation and exposure to the weather, is killed for food. This scene was shot in cuts. The actor lead the horse through the snow as it pulled the injured Postman on the gurney. To simulate the look of an ailing horse, production purchased a thirty-year-old horse from a slaughterhouse. The horse was supposed to be taken back to the slaughter house after completion of filming, however, a crewmember on the production purchased the animal and it will live the rest of its days on his ranch.

There is another huge battle scene where horses are rearing and falling. Some horses and men are lying on the ground, supposedly dead, as another horse limps off the field. Again re-enactors were used with experienced stuntmen and trained rearing and falling horses. To simulate the lame leg for the horse, the trainer placed a band of sorts around the horse's fetlock, which caused an unfamiliar feeling and made the horse lift its leg as it walked away.

For all battle scenes, only experienced riders and horses were used and pick-up riders were strategically placed around the perimeter at all times. Many of the riders were professional re-enactors using their own horses. The explosions and smoke were kept at a safe distance from all animals, however, through the art of filming and special camera lens, in some scenes the animals may appear to be closer than in reality. Special non-toxic makeup was used for the blood on the horses. Balsa wood and candy glass were used for all breakaway surfaces. As a safety precaution, all trails and terrain were cleared of any debris, rocks, branches, etc. When the horses are riding near or on a cliff side, only experienced re-enactors and their horses or trained professional horses were used. The horses were never closer than 8ft to the cliff side. Additional wranglers were strategically positioned near and around the perimeter.

There is a scene where a Lion attacks a Holnist soldier. This scene was shot in several cuts. The actual attack to the soldier is not seen. The view of the scene is very obscure, leaving much to the imagination. While the lion was on set only those significant to the scene were allowed to be present. Trainer #1 placed the lion on its mark in a down position and trainer #2 cued it with a buzzer to point B where its feeding pan had been placed.

American Humane monitored the animal action with some on set supervision provided by the Redmond County Humane Society.