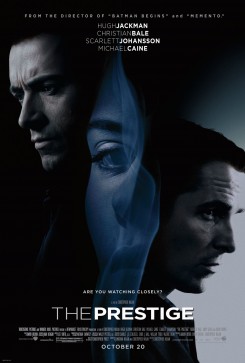 Rivalry becomes risky when two magicians (Hugh Jackman and Christian Bale) turn friendly competition into murder. The line between illusion and reality is blurred in a battle for total supremacy. Who will rise to the top as the greatest magician, and at what cost?

In one scene, a magic trick is performed that involves a bird in a cloth-covered cage. When the magician pushes on the covered cage, it collapses on a table and he produces the bird in his other hand to show the audience that it is okay. Backstage, however, it is revealed that the bird actually died in the collapsed cage and the magician had shown the audience a double. This scene was done in several separate shots. A real bird was placed in the cage and removed before it collapsed. The filmmakers provided documentation to show that the bird used to depict the dead one in the collapsed cage was fake.

Later in the film, viewers get a backstage glimpse of how the magician has perfected the cage trick using doves. The actor ties a monofilament line around a dove's foot and a trainer places the bird in the collapsible cage. A fake dove replaced the real one when the magician pulled the bird out of the cage with the monofilament line before it collapsed. During filming, the trainer lay on the ground out of camera range holding a live dove. The unseen trainer then pulled the line of the fake bird and handed the live dove to the actor, who revealed it to the audience to much applause.

Backstage, several cages house the many birds used in the magic tricks. Wranglers brought 40 canaries to the closed set and transferred them to the prop cages seen in the film. The American Humane Certified Animal Safety Representative monitoring the production inspected the cages beforehand to make sure the birds would be comfortable. Wranglers stood off camera holding catch nets in case they needed to capture any of the birds. The birds seen out of their cages or flying around the room were controlled by off-screen wranglers who retrieved them afterward.

One scene features an actor bringing a cat into the room as part of a magic trick. After the actor ties the cat's leash to a stake in the ground, a machine is turned on and lightning bolts appear, frightening the cat. The actor unties the cat, which then runs away. A trainer attached the stake to the ground and instructed the actor on how to handle the animal for this scene. During filming, the trainer stood off camera using a combination of verbal cues and hand signals to get the cat to look in various directions and to hiss. When cued, the cat then ran to a waiting trainer, who rewarded the feline with a treat. The computer-generated (CGI) lightning bolts were added in during post-production. Later, two cats wander outside around several top hats. Trainers scattered food around the hats to entice the cats to wander around them.

When a volunteer is invited on stage to participate in a magic trick, he approaches what appears to be a plain table covered only by a cloth. However, when he picks up the cloth, a goldfish swimming in a bowl has magically appeared on top of the table. This action was filmed in separate shots, with the bowl placed on the table when the camera wasn't rolling so it would appear that the fish materialized by magic. The goldfish was purchased at a pet store and adopted by a crewmember afterward.

Horse-drawn wagons and carriages are seen throughout the film as the common modes of transportation in this period piece. Wranglers doubling as actors drove the lightly loaded wagons and controlled the horses. Trainers and the Safety Rep checked the roads and ground prior to filming to make sure they were clear and safe for the horses. The snow in the film was artificial, and on all sloping terrain, the horses were detached from the wagon and the trainers pushed it uphill. Wranglers on horseback waited out of camera range in case the horses decided to wander.