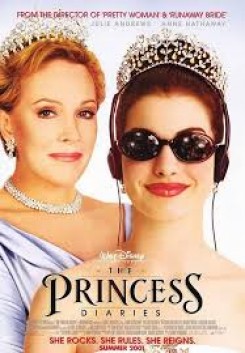 One might believe that a hip 16 year-old who lives in New York City is pretty unflappable. However, Mia (Anne Hathaway) is staggered to discover that she is the sole heir and crowned princess of the small European nation of Genovia. Apparently, her mom had a brief love affair with a member of Genovia's royal family, but kept it a secret from Mia. Now, her new found grandmother (Julie Andrews) is on a crusade to teach Mia what is expected of a princess. What Mia learns is that she must face the pesky responsibilities that come with the privilege of royalty.

Fat Louie the Cat
Fat Louie is shown in several scenes throughout the film lying down and watching as the dialogue swirls around him. All of the actors and the cat were introduced to each other before filming began so that they were a veritable ensemble by the time the camera rolled. The trainer would set the cat on its mark and then using hand signals from off camera, would get the cat to look in different directions. In some scenes, the trainer would place the cat in the actor's arms. Once the scene was wrapped, the trainer would retrieve Fat Louie who appears to be well rewarded with treats.

Dog Action
There are two scenes where dogs are being walked on leashes. The trainer handed the leash to the actor and stood off camera to retrieve the dog when filming ended. The canines also received treats to reward their performances.