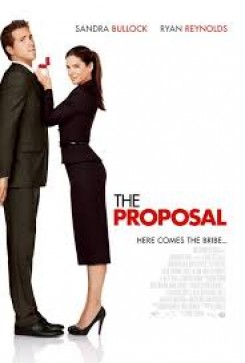 Canadian-born Margaret Tate (Sandra Bullock) is a bully publishing mogul, who treats everyone, horribly, including her assistant Andrew (Ryan Reynolds). But when her visa expires, she bribes Andrew to marry her, and to fool the INS, they have to pretend to not hate each other while spending a weekend with his family.

Dog and Eagle Action
Andrew's (Ryan Reynolds) parents have a pet dog named Kevin. Several American Eskimo/Samoyed puppies were alternated in this role and were rested between takes. Streets were closed off to traffic and grounds were inspected for safety before filming. Cast and crew members were introduced to the dogs and instructed on their proper handling. For scenes in which a dog performs such mild action as sitting on actors' laps, walking from one point to another or being petted, trainers placed the dog on its mark and stood off-camera, using hand signals and verbal commands to cue the actions, which the trained dogs were accustomed to. For scenes in which an actor held, petted or handed off the dog, the actor was well-rehearsed and instructed on the safest, most comfortable way to hold the dog. Barking was a cued behavior. During some of the scenes in which trainers enthusiastically cued the dog to "speak," the dog became so excited that it naturally jumped up.

While the dog is blocking the bathroom door, Margaret (Sandra Bullock) blows the dog's fur with a blow dryer, in hope of startling him out of the bathroom. For this scene, the well-rehearsed actress held the blow dryer several feet from the dog, which was cued to stay, and then used the cool setting to gently blow the dog's fur, an action which the dog found fun and thought was a game. The dog was immediately rewarded with treats afterward. The action in which the actress calls the dog onto the bathroom rug and swings the rug around was a well-choreographed action that did not faze the dog. Trainers hiding in the bathroom cued the dog to walk forward onto the rug, and the actress carefully rotated the rug around before exiting the bathroom and closing the door while the dog remained in his cued "stay" position.

Kevin runs onto the lawn, barks at Margaret, and is suddenly snatched up by an eagle, which flies away with Kevin in its mouth, and then flies around with him before dropping him several feet from the air and into Margaret's arms. For this scene, which was filmed in separate shots, two live eagles were used, although never at the same time as the dog. First, trainers cued the dog to walk around, pace and bark. Then, the dog was removed from the set and a trained eagle was used for the live eagle action. The trainer, with the eagle on his arm, walked up a ladder and set the bird on its mark on a tree branch. The eagle had a tether attached to leather straps on its ankles, and a second trainer held the tether and whistled for the eagle to fly to his arm. This action was filmed a couple of times. The bird was rested and given treats after each take. A sack that would be "invisible" against a green screen was placed on a custom-made stand on the ground, and the eagle was cued to fly down, grab the sack and fly back up, all while trainers controlled the tether. The sack was then replaced with "Kevin" in post-production. During some takes, the sack was replaced with a stuffed prop dog. All these shots were edited together to make it appear as if the eagle snatched up the dog mid-flight, but the dog and eagle were never actually in the scene together. Part of the scene in which the eagle flew around with the dog in its mouth was achieved using prop claws holding a stuffed prop dog, filmed against a blue screen. The dog that the eagle "dropped" into Margaret's arms was a stuffed prop.

For the scene in which Margaret runs around holding Kevin by the waist, the actress was well-rehearsed on how to hold the dog and run with him, and the eagle hovering above was digitally added in post-production.

A couple of dogs are in the background in the town's main street. These were the actors' dogs, and the actors were instructed to walk them on their usual leashes and allow them to do whatever came naturally.

Duck and Seagull Action
The ducks in the water near the harbor and the birds seen flying around in the Alaskan town, were filmed in their natural habitat.

Production provided documentation that the animal pelt seen on the Paxtons' couch was a prop.