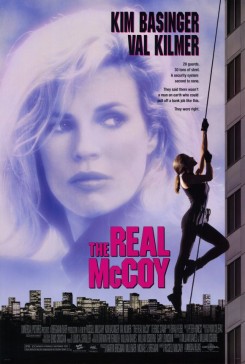 Karen McCoy has just spent six years in the state penitentiary for being one of the most notorious bank robbers of modern times. Upon her release, she discovers that her ex-husband, Roy, has remarried and that he has told their son, Patrick, that Karen died. Karen hates Roy for alienating her son, but decides that maybe this was best for the boy, for the time being anyway.

Karen is on parole and has every intention of getting a job, going straight, and maybe then telling Patrick the truth. Her parole officer, Mr. Buckner, is a seedy character and makes life difficult for Karen. Karen finally finds out why he is so hard on her when she discovers he is in cahoots with Jack Schmidt, the sleazy con who was responsible for Karen being caught and sent to prison. Schmidt wants Karen to pull off a bank robbery for him, with the take being in excess of 18 million dollars. Karen refuses until Schmidt has Patrick kidnapped. We watch as Karen must now pull off the biggest bank heist of the century in order to save her son's life.

Four Doberman Pinschers, a pair of trained attack dogs and another pair of more docile dogs, were used while making this film. In one scene as Karen and Buckner drive onto the Schmidt Estate, Buckner parks the car and two Dobermans jump up on Karen's side of the car and bark menacingly. The two dogs used in this scene were the attack dogs. A burlap sack, held by their trainer, who was out of camera range, was used to make them bark. The burlap sack was the same one used to originally train the dogs to be guard dogs.

In a later scene Karen plans a break in at the Schmidt Estate in hopes of finding her kidnapped son. She rubs two steaks with Nite Nite sleeping powder and heads for the estate. She throws the steaks over the estate wall to the patrolling dogs, where they eagerly devour the meat. After a short wait Karen easily scales the wall and trots by the dozing Dobermans. The steaks given to the dogs did not actually contain any type of drugs. The attack dogs were the ones who were given the steaks and then the more docile dogs replaced them. The dogs merely did a lay down, following their trainer's verbal commands. Two dobermans are also seen being walked on their leashes in one other scene.

Two tigers are present in three scenes as residents at the Schmidt Estate. In one scene Buckner's car crashes through the tiger's caged area. Dazed, he gets out of the car and starts to walk back towards the estate. He reaches the gate and realizes where he is. He turns around in time to see one of the tigers leaping right at him. This scene was shot in cuts. The tiger was not in the caged area when the car crashes through it, nor was the tiger and the actor ever in the area at the same time. The tiger merely jumped from the ground onto a short platform, following his trainers verbal commands, with food as a reward. The camera was angled underneath the tiger to make it appear as though the tiger was leaping upwards.