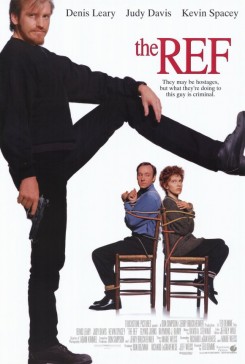 The Ref is a comedy about a thief who holds an upper-middle class family hostage on Christmas Eve and saves a deteriorating marriage.

Lloyd and Caroline Chasseur live in a nice neighborhood in Old Saybrook, Connecticut. Extremely incompatible, they are trying to save their marriage by visiting a marriage counselor. Their teenage son has shipped off to military school where he makes money on the sly by blackmailing one of his teachers.

A jewel thief operating in the Chasseur's area, goes undercover after an attempted heist goes amiss. He abducts Lloyd and Caroline at gun point, seeking refuge in their home. His plan is to hide out there a few hours, hook up with his accomplice who will have secured a boat, and sail away to freedom.

Matters become increasingly complicated due to visits to the home by the cops on a manhunt, the Chasseur's son, Jesse, a car load of relatives, and a drunken neighbor in a Santa suit.

Throughout this fiasco, the various strata of suppressed feelings within the extended family are brought to light in a kind of group gestalt catharsis, which though painful to deal with, ultimately result in healthier relationships all around. The marriage is saved, the son's blackmail involvements are resolved satisfactorily and the thief, a kind of good guy who is responsible for the family's newfound emotional health, avoids capture, presumably to go straight and live happily ever after.

Animal action is limited to some brief shots of a guard dog barking, growling, running and chewing a pool cue- ball which it catches in it's mouth. The pool ball was actually made of dog food and coated with an edible glaze similar to that used in making gingerbread houses. The actions were achieved by the trainer giving simple verbal and visual cues to the dog and rewarding with food.