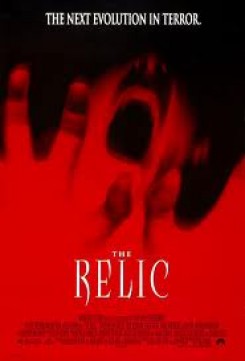 The Relic is a present day thriller set in the Museum of National History in New York. The museum has decided to open a new exhibit entitled "Superstitions" in order to raise funds for their continued existence. The new wing will be based on many cultures' beliefs in mystic powers and superstitions. Much of the staff, including Dr. Margo Greene, a biologist specializing in DNA, have been working on this project feverishly in order to get it ready for the fast approaching opening date. Because of this new exhibit, Dr. Greene works with Dr. Gusta quite often, as his expertise lies in the area of ancient cultures.

Dr. Gusta has received two crates from a colleague who was sent on an expedition to Brazil to gather information on Kothoga (meaning Son of Satan), a god which the Brazilian people believe to really exist. The crates are empty, except for some native foliage. Dr. Gusta believes that this was merely packing material and that the real shipment had been removed before he received the crates. Margo asks the doctor if she may examine some of these leaves before he destroys them. He agrees and Margo discovers some very unusual traits in this plant life. It seems that it contains some of the same ingredients as the human brain, only in much higher concentration. And indeed, unknown to all, there was something packed in these leaves. It was Sam, the doctor who was sent to Brazil. Unfortunately, he does not return in the same condition as when he left. He has been transformed into a beast of sorts, the Kothoga, and continues to morph into a more grotesque monster with every passing hour. The problem is that he needs the ingredients in the leaves to sustain life and those have already been destroyed. He must now resort to devouring human brains in order to exist. Reminiscent of The Alien, the monster proceeds with hair raising surprise attacks on his victims, decapitating them and eating their brains.

The police are called in to the museum to investigate two such cases where the victims were found headless. Unaware of what they are dealing with, they search for what they believe is a serial killer. They find a homeless man living in the basement of the museum and in a struggle, he is killed. They attribute the murders to this dead man and the museum continues to plan their opening for the next night. As expected, the museum has its gala opening and the beast raises its ugly head. In this thrilling climax, we watch to see who will overcome, man or beast.

Animal action involves two police dogs and beetles. In a scene while the police are searching the museum for the killer, two police dogs are called in to aid in the search. The dogs are seen walking on leashes with a policeman. One of the dogs smells something and takes off down the basement tunnel. In turn, the other dogs follows. We hear a yelp and the next scene shows a decapitated dog. This was not a real dog, but a fake supplied by the props department with stage blood applied to it. When the dogs run down the tunnel, they were following verbal commands from their trainers, who were out of the camera's range.

Several beetles are seen crawling on bone remains, supposedly "cleaning" the bones prior to reconstruction for display. The beetles were placed on fake bones by their handler and retrieved as soon as the scene was completed. In another scene a beetle is seen in Dr. Greene's office scurrying into the pile of leaves brought from Brazil. She places the lid back on the container of leaves and stores it for the night. When she returns and opens the container again, a giant beetle emerges. She smashes it with a book, killing it. The beetle that enters the container was placed on the counter by his handler and was coaxed into the container with smashed banana which had been placed under the leaves. The beetle was retrieved by the handler as soon as this shot was completed. The giant beetle seen being smashed was mechanical.