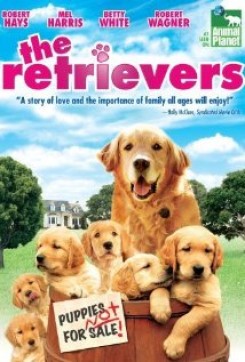 In this family movie, Tom Lowry is an advertising executive who is tired of the rat race and stress of a big firm, moves the family to a lovely suburban community and takes a job with a small local agency. The adjustment is not as smooth as he would have expected and along with the house in the country comes a canine visitor _ a Golden Retriever who the kids name Pilot. Pilot however not only steals their hearts, but delivers six puppies who bring the family more challenges and discoveries then they ever dreamed.

The Welcome Wag:
As the family is unloading boxes and moving into their new home, they discover that Tom's Palm Pilot is missing. The thief, shows up in the form of a sweet natured Golden Retriever who the kids, Liz and Widdy, appropriately name Pilot. Of course Dad and Mom want the dog to be returned to the home from which it has wandered and the kids want Pilot to stay. Since no owner comes forth, Pilot becomes part of the Lowry clan. Who has adopted whom?

Just when Tom and his wife Karen appear to have adjusted to one dog, Pilot delivers six adorable puppies. The kids name all six based on the little pups' individual characteristics: Chewy, Bandit, Mr. Dumas, Geogia, Wanderer, and Milkshake. Although the Lowry's agree that the young pups should be weaned by Pilot, they make a pact to find good homes for the dogs because seven Retrievers is more than they believe they can handle. The little darlings begin by clinging to mom but soon commence their puppy destruction of slippers, plants, furniture, etc.

The Lowry's post signs for a day of adoption and one by one the pups go off to different homes. Pilot is depressed and runs off to find her puppies, frantically followed by Widdy. When the two are found, Tom relinquishes and decides they can adopt back one of the pups. The family begins their detective work determined to find at least one to bring home.

Their task is particularly difficult in that it also becomes a real lesson in appropriate adoption and responsible pet ownership. The Lowry's neglected to check out the homes or new guardians who showed up to claim the pups. They didn't even get addresses or contact numbers. As they set out to find the pups, they discover how unfortunate some of the homes are for the little dogs and learn a great lesson in pet guardian responsibility.

Retrieving the Retrievers:
One of the pups is adopted by a farmer who brings the little retriever home to his farm. The farmer appears fond of the pup and places it in a crate to keep it out of harm's way when he backs up his tractor. The mischievous pup jumps out of the box and is accidentally run over by the heavy machinery. For this scene, the puppy was nowhere near the tractor when it was moving and was never in any real danger. This however, becomes a lesson in loss and the family learns how much each of the little pups has meant to them.

When the family becomes aware that the puppies may have run off into a lumber mill, they are desperate to locate the pups before one comes to any harm. For this scene, the trainers released and called the dogs from point A to point B and rewarded them with treats for following their cues. When the lumber mill equipment is seen in motion, no dogs were on the set. In post-production the scenes of the active mill and the dogs running were edited together to create the sequence.

Profiling the Pups:
The trainer was aware that the production needed six puppies and purchased several from different litters. Knowing the schedule for filming enabled the trainers to select puppies that were at least 8 weeks old and naturally weaned from the mothers. The trainers' policy is that, once filming is complete, they do not re-sell puppies for profit, but seek the best appropriate, permanent, loving home for each of the animals. All of the perspective homes were carefully researched and the puppies' personalities were matched with the individuals who would eventually become their new families.

At the time filming began, the pups were eight to nine weeks old. Since they would be going to new homes at the end of production, the trainers did not give them names. Instead they distinguished each puppy by collar colors so that the new guardians could name the new addition to their own family. Most of the time they called "puppypuppypuppy" and also buzzer trained the animals to go from A to B.

The new owners were mostly relatives and employees of trainers: one went to the owners of a private boarding school where the pup is quite happy frolicking in the country surroundings with his new large family of children; two went to employees of the trainer; one to the father-in-law of one employee; and one to the line producer of picture. That left one last puppy. After having the veterinarian check out all the pups, the trainers found that one puppy had a heart murmur. While the pup was quite healthy, the vet advised that this condition could cause the dog to have a shorter life than the others and that the life expectancy was very difficult to determine. The trainers believed it was their responsibility to candidly inform any perspective guardian that there was this risk. However, the people from the school who had already passed the test as guardians wanted a second puppy. After discussing it with their vet, they adopted the dog and gave it a caring home to share with its puppy companion, lots of attention from adoring children and a spacious country environment.

Each puppy had a natural character trait that was encouraged and rewarded by the trainers, rather than trying to "train" a behavior as might be expected with an older dog. Chewy was actually given a slipper to chew on and play with in pre-production so it became very natural for him to chew the prop while being filmed. The pup most into carrying things was encouraged to carry the paper. One was encouraged to play retrieve and another to bark on cue. Two were naturally quiet and mellow, so were chosen to be the laid back characters. The smallest pup did a scene where he was placed in a sack mainly because he was the one that fit. All of the puppies were given lots of breaks and play periods and were monitored by the trainers at all times.

Two adult dogs named Ajax and Solar, who particularly liked the puppies, played the part of Pilot. Both were males and are used for filming because the male Retrievers tend to have a larger body structure, lush coat and can be prettier than the females. Both were used interchangeably to play the female, Pilot.

When the mother, Pilot, appears in a box to be whelping the newborn puppies it was neither Ajax nor Solar. The dog seen nursing was owned by a member of the community who allowed the production company to come to the house and film the whelping pups without having to move them. This documentary shot is very tight on just the box and the dogs which made it easier to edit into the film and create the illusion that the dogs and the whelping box were in the Lowry home. Luckily the real dog matched the canine actors well enough to make the scene believable.

Later in the film there is a litter of kittens that appears near the Lowry home. These kittens were from a local rescue group and used just for one scene. The rescue personnel and trainers were on hand at all times to insure the animals' welfare