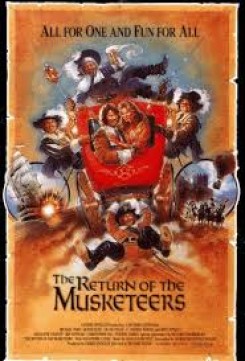 Return of the Musketeers, The

This is the second sequel to The Return of the Musketeers with the same swashbuckling stars assembled for their reunion. It would help to have some knowledge of France's history to follow the complex plot, but if you're not a Francophile, don't worry because the plot serves mostly as a backdrop for the comic antics of our, now middle-aged musketeers. They've been separated since they ordered the execution of the evil Lady De Winter some twenty years earlier. Now they are reunited to fight for the Queen and Cardinal. To their surprise, they must also battle an assassin, Justine, who is De Winter's daughter and just as evil as her wicked mother. Justine is dedicated to avenging her mother's death. It's a lavish adventure-comedy, but many of the jokes are lost in half-heard asides and much of the humor is about as tired as our aging musketeers.

Animal action: The horse action is straightforward and there are no falls or stunts. However, an actor, Ray Kinnear, was killed in an accident when he fell from a horse. The film is dedicated to him.

A dog is pushed and tossed out of bed. He then goes to his own bed. Cows, goats and birds are seen as atmosphere. An animal skewered on a spit is a fake prop. Goats pull small carts in a game the Queen plays. In a scene that was filmed in Spain, geese were bunched together under a net and pulled across the ground below a hot air balloon. Although the geese do not appear to be harmed, no humane representative was present at the Spanish location, and AHA was unable to substantiate the humane treatment of the geese.