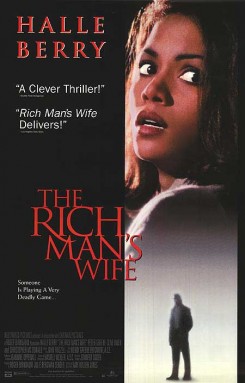 The Rich Man's Wife is a drama about Josie, a beautiful young woman, who is married to Tony, a rich executive and an alcoholic. They are having problems in their marriage and both of them are having an affair. Josie feels guilty, so she breaks off her relationship with her lover and asks Tony to take her away on a vacation so they can try to save their marriage. They go to a friend's cabin in the mountains, but when they get there, Tony has to go back to the city for business. Josie decides to stay at the cabin.

She goes to a local bar to have a drink, but she feels uncomfortable being stared at by the men, so she leaves. On her way back to the cabin, her truck stalls. It is a cold dark night and she is stranded in the woods until another truck pulls up behind her. Cole, one of the men she saw in the bar, gets out of the truck and offers to drive her back to the cabin.

The next morning Cole fixes her truck and they make plans to have dinner together. They go to dinner and they both have too much to drink. Josie is dancing and having a good time until Cole starts caressing her. She stops him and they go back to the table to talk. She tells him she is unhappily married but she can't divorce her husband because before they got married, she was a teenage runaway working at a grocery store and Tony had her sign a prenuptial agreement stating that if she ever divorced him, she would get nothing. Cole offers to kill her husband for her. She is shocked that this man she just met told her he would kill her husband, so she gets up to leave. Cole catches up with her and tells her he will drive her home. As Cole's driving, he turns off the headlights and drives frantically on the windy path, scaring Josie. They get to the cabin and she jumps out of the truck and runs for the house, but he grabs her and tries to rape her. She manages to get in the house, pull a gun out of the kitchen drawer and shoot at him, barely missing him. He threatens her and leaves.

Three weeks have gone by since her incident with Cole and she is back home with Tony. Tony has stopped drinking and he and Josie are trying to make their marriage work.

One night Tony is driving home from work and Cole jumps up from the backseat. He puts a gun to Tony's head and makes him drive to a deserted park, where he repeatedly shoots him. Cole then goes over to Josie's house and explains to her how long it took for Tony to die after he shot him with her gun from the cabin. She tries to call the police, however he explains to her that he will tell them she hired him to kill Tony so she could get his money. She has no witnesses and no alibi, so when the police question her, she lies to them and tells them she doesn't know who murdered her husband.

Cole wants $30, 000 before he will give Josie back the gun and leave her alone. Tony never made a will so his estate and all his assets are frozen in probate, which forces Josie to sell her jewelry to get the money. She meets Cole in a tunnel and he tries to kill her, but she runs off across the freeway and gets away.

She decides she needs to go to the police and tell them the truth, but Jake, her ex-lover and the only other person that knows about Cole, won't let her. She figures out, he is the one who hired Cole to kill Tony. She runs from Jake and goes to her house. Jake sees Cole's truck and tries to warn Josie, but Cole shoots him in the back and kills him, then he goes after Josie again. She hides from him, until he goes outside, then she runs into the garage. Cole hears her and crashes through the window. They fight until she finally shoots and kills him. The police arrest her for the murder of Cole and Jake, but since they have no witnesses and no evidence to prove otherwise, they have to believe her story of self defense and let her go.

In one scene the police detectives are trying to solve this murder mystery in their office and in the background there is a fishtank with a few small fish swimming in it. The police detective takes a pinch of fish food and drops it into the tank. The fish were in a twenty gallon fresh water tank which had a filter, heater, and thermometer. The temperature remained at 78 degrees.