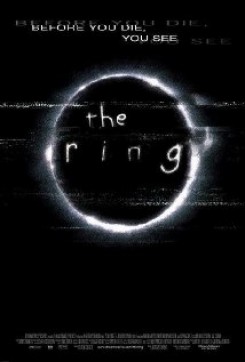 Reporter Rachel Keller (Naomi Watts) discovers a creepy videotape that kills whoever watches it within 7 days. The stakes rise when her son accidentally views it, and she must solve the deadly mystery before their time is up. Part of the mystery involves horse fatalities on a breeder's ranch, and Rachel unexpectedly scares one particular horse to death.

While on a ferry, Rachel approaches a horse being transported in a trailer and puts her hand inside to pet it. The horse suddenly panics, pulling free from his rope-tie and kicking open the trailer's metal door. The frightened horse runs from the trailer and through several rows of cars parked on the ferry, stopping only to rear up on top of the hood of a car then jump over the next few. It eventually leaps over the side of the ferry, appearing to plunge to its death in the icy-cold water below. Eight experienced stunt horses shared the carefully choreographed action of this intense scene. Each horse was specially trained for a specific action, such as spinning, rearing, jumping, and kicking. Thick rubber mats lined the ferry floor to ensure safe footing for the horses, and all potentially harmful objects, such as vehicle side-door mirrors, were removed. A trainer hid inside of the trailer to cue the animal to strain against the rope, which was tied with a breakaway feature. For the rearing sequence, trainers lined the path from the trailer to the safety-enhanced car, directing the horse's action from off-camera. The horse's dive into the water was simulated by filming the animal jumping over a low rail in front of a green screen. The horse actually landed on a soft sand area. The dramatic effect of the horse leaping off of the ferry and crashing into the water was achieved by editing the green-screened jump with a computer-generated one. No live horse actually dived off of the ferry.

Several dead horses lie on the shore. To achieve this, production purchased taxidermy horses and positioned them on the beach for filming.

Rachel sees pictures of a woman on horseback. Trainers guided the horse as the actress posed with the animal for several establishing shots.

Various insects crawl around on the videotape. Insect wranglers scooped worms and maggots into a pan and let them crawl around, delicately directing their movement with a paintbrush.

A centipede crawls on a document that Rachel is holding. Rachel drops the document and the centipede crawls away. A trainer carefully placed the poisonous centipede onto a clear sheet of Plexiglas and prompted it to move by gently blowing air through straws on its body. This shot was then superimposed over Rachel's document in post-production.

Rachel lifts a fly off of a television screen and holds it between her fingers. Later, a fly crawls on the wall and a swarm of flies emerge and surround Rachel and Noah. They shoo them away. These were all computer-generated.

At the crab house, a man pours a bucket of live crabs inside of a bin already filled with them. Production filmed this scene at Dungeness Oyster House, a working market in Washington State.