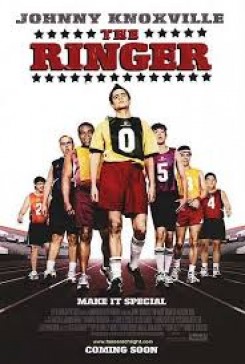 Johnny Knoxville stars as Steve Barker, a man so desperate for cash that he attempts to dupe the Special Olympics by posing as a person with mental disabilities. But as it turns out, his fellow Olympians are not only superior athletes; they seem to have more common sense as well. Instead of unmasking him as a fraud, the competitors decide to join forces to beat out Jimmy, the conceited reigning champion, and help Steve become a better person in the process. This film was made with the express endorsement of the Special Olympics.

During a training montage, a dog is released from a cage and begins to chase Steve around the running track. The dog catches up to him and jumps up to bite his shorts. A Belgian Malinois named Stu played this part. Stu is a retired Austin, Texas, K-9 patrol dog that lives with his retired human partner, Jim Davenport.

This sequence was filmed in several separate shots edited together in post production. A trainer placed the dog inside a wire cage that had a string attached to the door and stood off camera using hand signals to get the dog to bark and growl. The actors stood next to the cage, and one of them pulled the cage door open on the director's command.

Knoxville had a head start before the trainer released Stu, who ran past the actor to a second trainer waiting to retrieve him at the end mark. For the shot of the dog pulling on Steve's shorts, a trainer doubled as the actor and held up a padded sleeve off camera to excite the dog. As a former K-9 cop, Stu was very familiar with this kind of training.