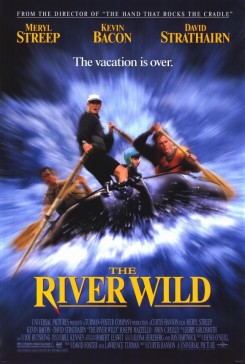 When Gail and Tom Hartman decide to take their ten year-old son Roark on a river rafting vacation, they believe it will pull the family together and perhaps save the flagging marriage. What they don't expect is to be kidnapped by two killers who are making their getaway down the river, posing as vacationers. In The River Wild the Hartman family befriends the killers, believing them to be stranded tourists and in so doing become their victims. Since the thugs cannot negotiate the river rapids by themselves, they coerce Gail, who was a champion white water rafter in her youth, to get them down the rapids. They beat up her husband and believe they have killed him. They also threaten her son's life in order to force her to cooperate. However, Tom Hartman does survive and along with the family dog, Maggie, helps his wife save their lives and foil the villains.

There are several scenes in which Maggie, the family dog, helps the Hartmans and finds herself in some dangerous predicaments, but for the most part, the dog is seen walking in the woods with Roark, playing the stick game, riding in the raft with the family, or climbing up and down hillsides along the river. For the walking and climbing action, the dog was released by one trainer and after a verbal command, walked to the second trainer where she was rewarded with food. While riding in the raft, Roark held the dog by a clear plastic tubing that had been tied to the collar to help keep the dog in place. Also, there were three trainers present. One trainer placed the dog in the raft and for some shots actually rode in the raft telling the dog to stay. There was a second trainer at the halfway mark and a third at the end of the run. Two kayaks and two motorized boats were also present, but out of camera range. It is important to note that there was extensive preproduction training which included four yellow labs who shared the part of Maggie. All of the dogs were strong swimmers.

In scenes where Maggie barks at the killer in a suspicious way, a second lab was used to excite the dog on camera. Since these dogs were trained together, this was a playful experience and did not agitate the dogs in a negative way. There is a scene where Maggie playfully is running around in the bushes and flushes out a flock of quail. This scene was shot in cuts and the dog was not in the same shot as the quail. Handlers were present in the bushes and on a verbal cue tossed the birds up simultaneously. The birds were released into the wild following the shoot. No harm came to the birds or the dog.

In a later scene, when the killers finally expose their plan to kidnap the family and use them to get down the rapids, Tom Hartman tries to fight for his family but is beaten by the head thug, Wade. Wade then pulls a gun and says he will kill either the father or the dog. He decides to shoot the dog. Roark yells to Maggie and makes a pushing motion for her to run. As she does, Wade takes aim and fires at the dog as she disappears into the brush. To accomplish this, the dog was set ""on mark"" and as Roark pushes and screams, Maggie is verbally cued by her trainer to run off camera. Although the dog was conditioned for gunfire, she was not actually present when Wade fired the gun in this scene.

The most exciting animal stunt was when Maggie is encouraged by Tom to jump into the river from a cliff above so they can track the boat where Gail and Roark are being held captive. The actor playing Tom is already in the water and Maggie is still above on the rock ledge when he calls to her. She paces and circles on the rock before leaping off and landing in the water next to him. They both then proceed to swim to the opposite bank. To prepare the dogs for this scene, extensive training was done prior to the start of principle photography. Four trainers worked with the dogs for several months in a pool that had a moveable platform that could be raised in increments. The pool also had steps for the dogs to use in getting out after each jump. The dogs first learned to jump into the pool from a three foot platform. Two trainers, one in the water and one on the platform, were present. Each dog was encouraged to jump by tossing her favorite play toy into the water. Eventually the platform was raised little by little. By the end of a three month training period the dogs, who were eager to jump, were able to jump from a ten foot platform. For the actual filming, the platform was built only five feet above the water. The scene was shot in cuts. In the film, the dog paces on the rock ledge before the jump. To give the appearance of pacing, the dog was given verbal and visual commands by two trainers. One trainer would call her out to the ledge and command her to hold and stay. Then the second trainer would tell her to backup and circle. The trainers did this several times in succession. The dog is then seen landing next to the actor in the water. The actual jump into the river was off of a special platform where a trainer waited with the dog and made sure his footing was good, then tossed his favorite toy into the water to encourage him to jump in, which he did. Neither the platform nor the toy is visible in the final edit. For extra precaution, a second platform was built down river approximately fifteen feet away where trainers were stationed to insure the safety of the dog.